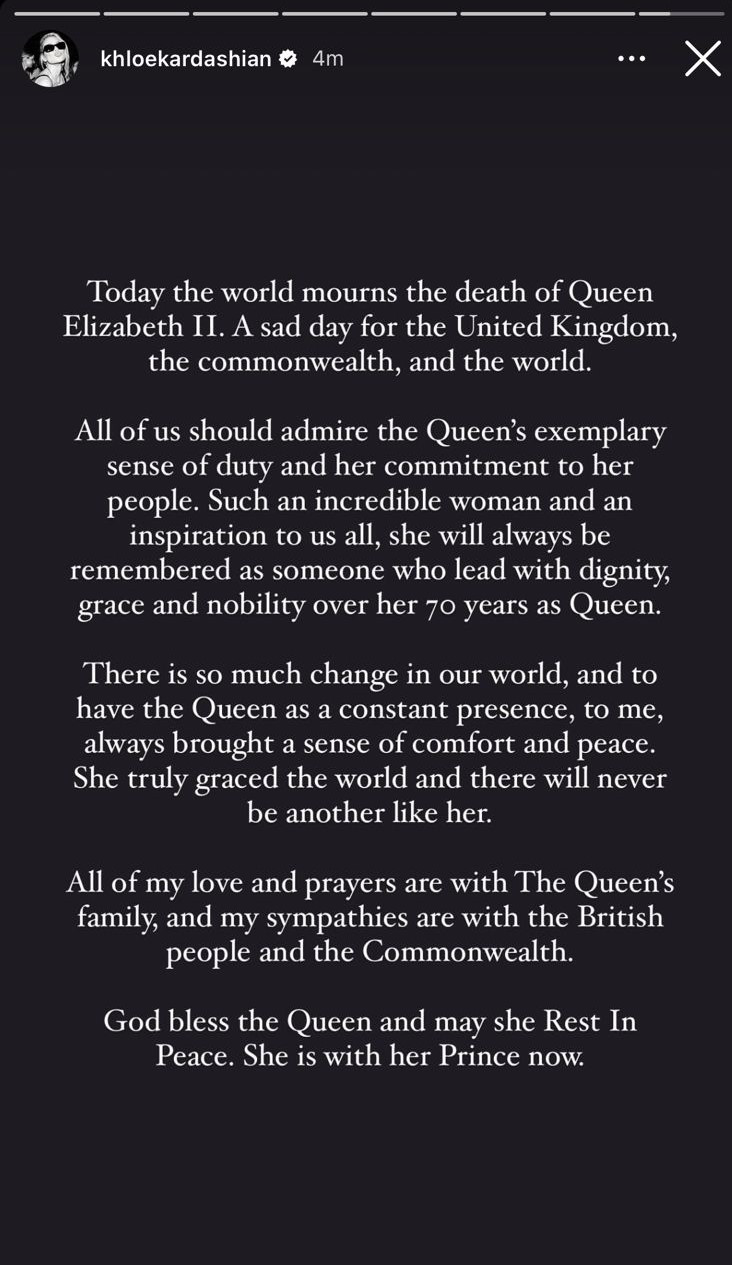 Campbell, Qamar and others pay tribute to Queen Elizabeth II


The UK’s Queen Elizabeth II has died aged 96 at her Balmoral residence in Scotland. “The Queen died peacefully at Balmoral this afternoon,” Buckingham Palace announced at 6:30 pm local time in the UK. Britain’s longest-serving monarch was taken ill earlier on Thursday, having cancelled an appointment with the Privy Council on Wednesday.

Her family members that were not already present in Balmoral rushed to the scene. Buckingham Palace’s statement said that her heir, Prince Charles, now the king, and his wife Camilla, the queen consort, would remain at Balmoral and would return to London in the morning.

Mourners across the world pay tribute

Following the tragic news, mourners across the world took to their social media to give condolences and pay a hearty tribute to the “The Queen of Queens.” From musicians to actors to models and athletes, celebrities who had a great fondness for the second-longest reigning monarch in world history filled the internet with love for the Queen just minutes after the news of her passing became public.

Musician Elton John, who is a close friend of the Royal Family, including the late Princess Diana, for decades took to Twitter to share how “dearly” he’ll miss the Queen. “Queen Elizabeth has been a huge part of my life from childhood to this day, and I will miss her dearly,” the Rocketmen singer wrote.

Reality TV star Khloe Kardashian took to her Instagram stories to share an emotional note on the “sad day for the United Kingdom, commonwealth and the world.” Offering the Highness her love and prayers and the family her sympathies, she added, “All of us should admire the Queen’s exemplary sense of duty and commitment to her people. She will always be remembered as someone who led with dignity, grace and nobility over her 70 years as queen.”

Khloe further shared how Her Majesty’s presence brought her “comfort and peace.” She concluded, “She truly graced the world and there will never be another like her. God bless the Queen. She’s with her prince now.”

Pakistani actor Armeena Khan offered her “sincere condolences” to the Royal family and prayed for her eternal peace.

While actors Saba Qamar and Minal Khan shared iconic pictures from the life of the monarch to pay their tributes, RJ Anoushey Ashraf expressed her sadness upon her sudden demise. 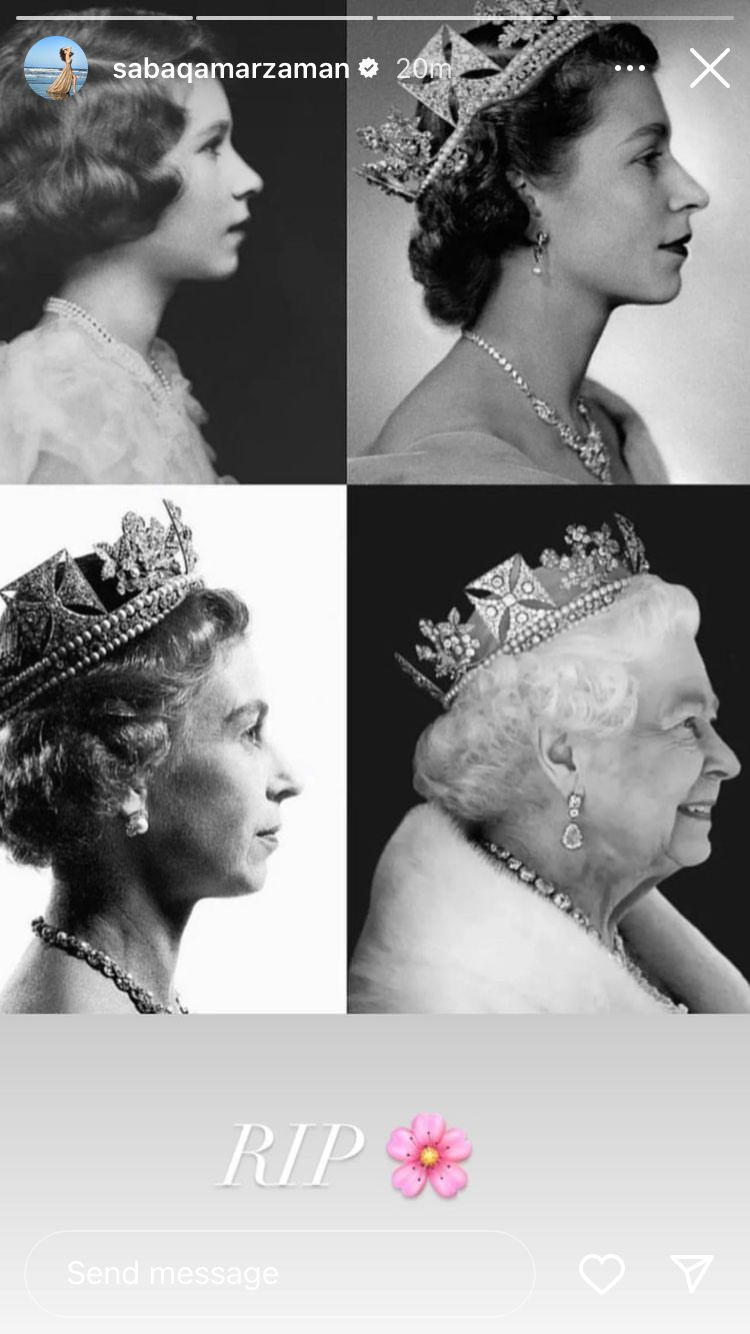 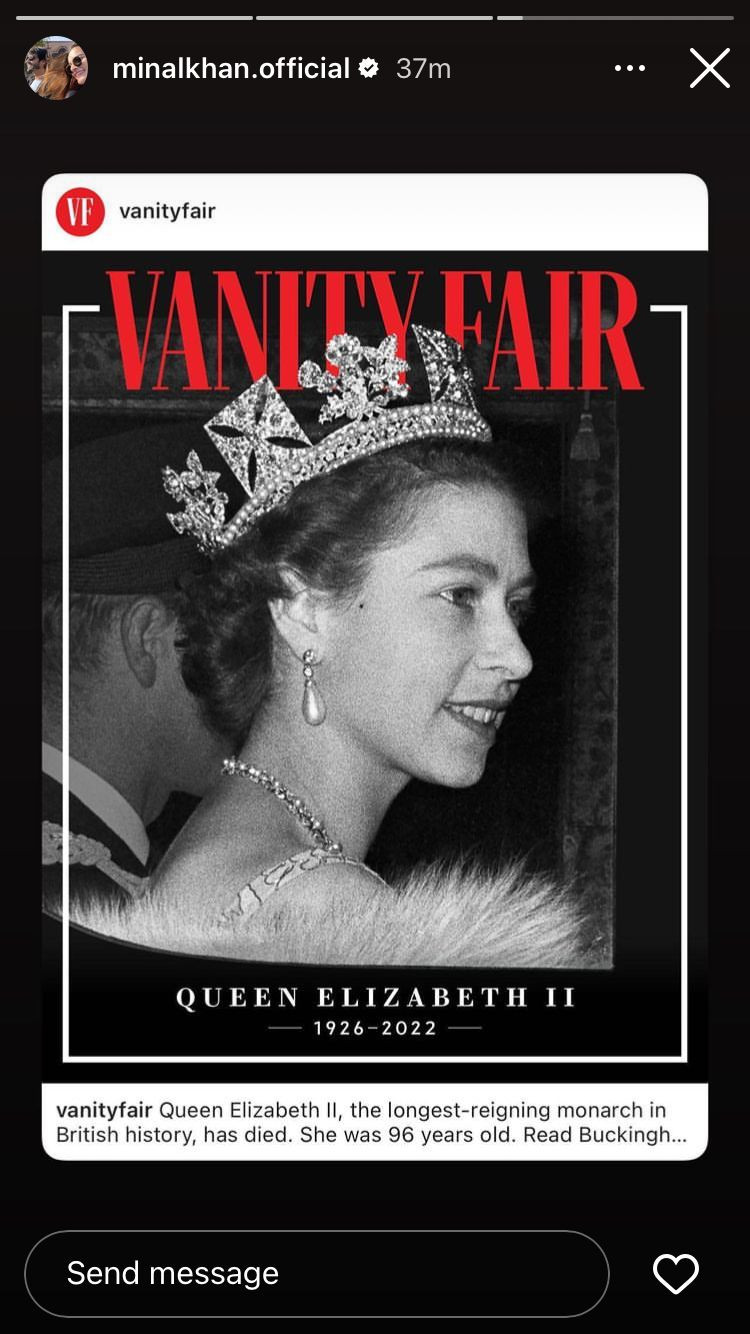 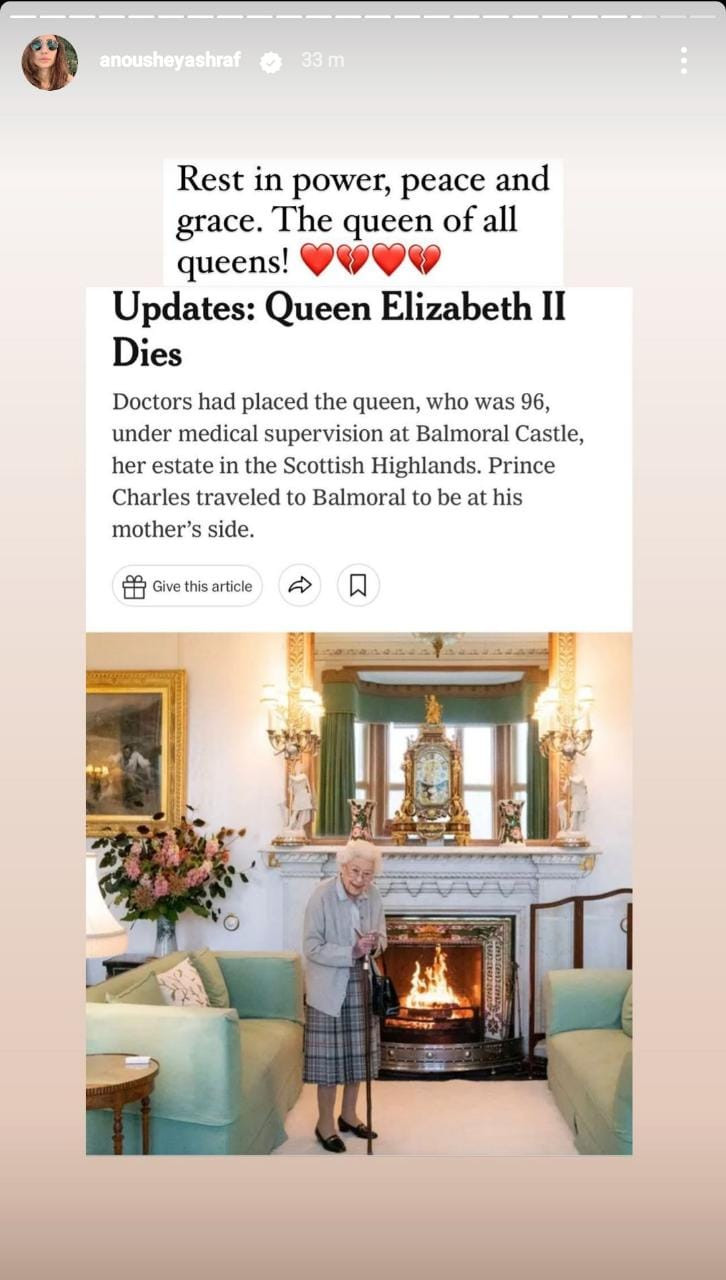 “A life lived under scrutiny and criticism, much reverence and fanfare, she had a wholesome existence indeed,” wrote Ashraf as she prayed for her to “rest in power.” 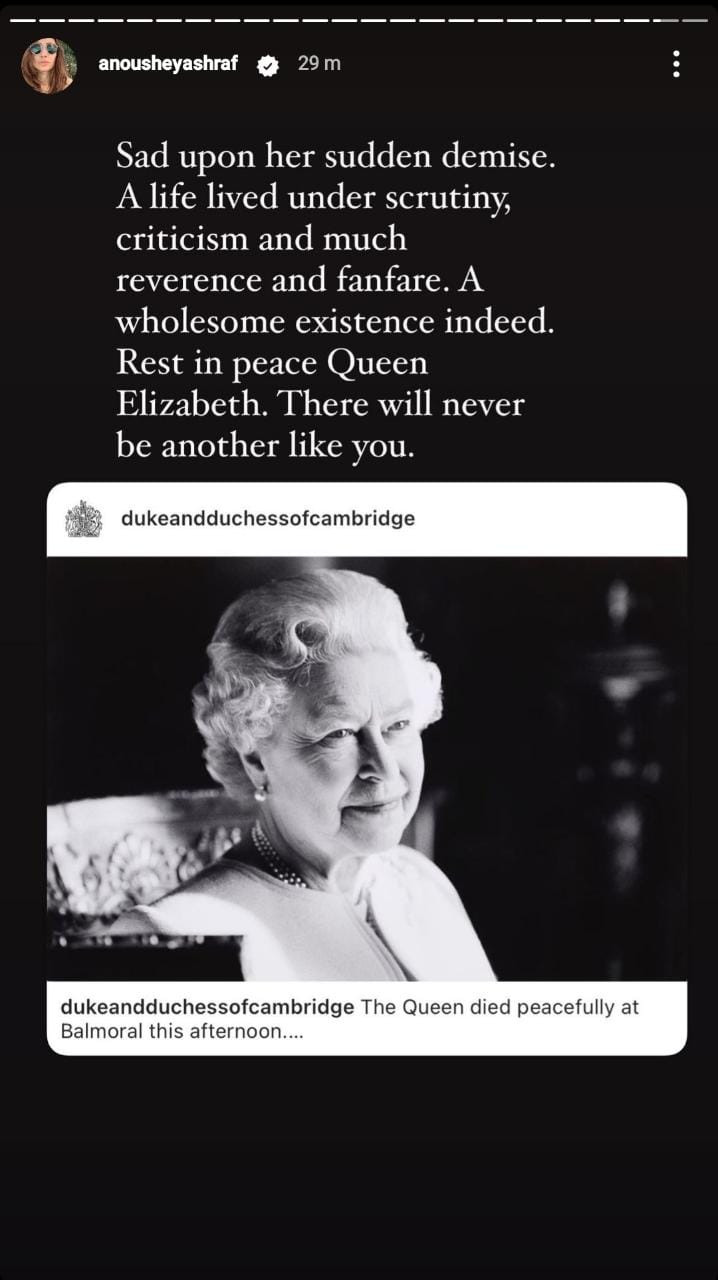 Host and anchor Dr Shaista Lodhi remembered the Queen’s “unmatched dignity.” She tweeted, “I extend my heartfelt condolences to the Royal family and the people of the United Kingdom on the sad demise of Queen Elizabeth II.⁣ Her Majesty was respected around the world and her grace and dignity were unmatched. She will be dearly missed.”

I extend my heartfelt condolences to the Royal family and the people of the United Kingdom on the sad demise of Queen Elizabeth II.⁣
⁣
Her Majesty was respected around the world and her grace and dignity were unmatched. She will be dearly missed. pic.twitter.com/UhqKwkxhme

Former Miss Universe Sushmita Sen shared a glorious picture of the Queen in a parrot green suit and penned, “What an incredible and truly celebrated life (she lived) She loved colours and lived every shade of it, in a single lifetime. The very embodiment of queen!” She concluded with a prayer for her eternal peace as well.

Actor Fakhr-e-Alam also paid his condolences to the Royal Family and the people of England. “The Queen is dead. Long live the Queen,” he wrote with prayers for her soul.

Tom Hardy shared pictures ranging from her teenage years to now on his Instagram, although without a message, to commemorate her tragic death.

Model Naomi Campbell posted pictures of the Queen on her Instagram stories with a dove emoji, that represents peace, a few white hearts and the flag of England as a tribute to the Queen. 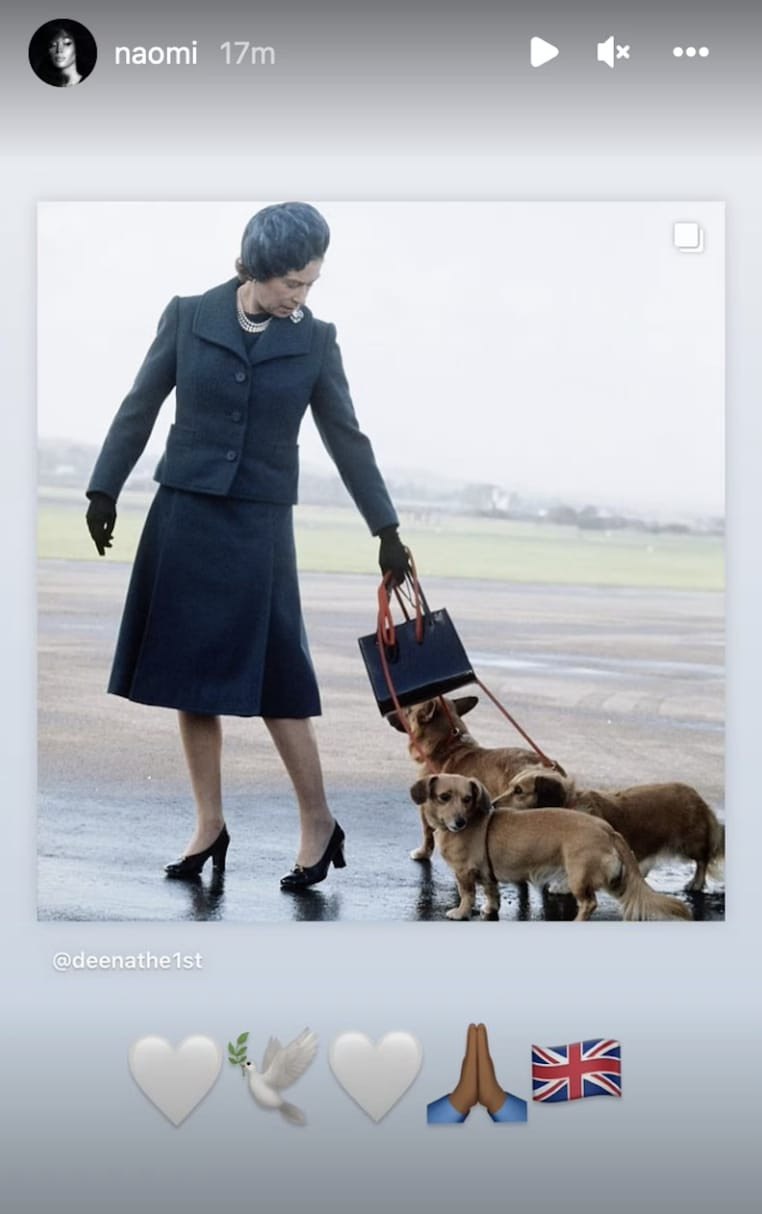 Musician Salman Ahmed went to his archives and brought out a picture of the Queen gracing the Pakistani cricket team at England’s Lord’s stadium in 1971. “Rest In Peace, Queen,” he wrote as he detailed the picture for context.

Queen Elizabeth II took to the throne on February 6, 1952, and ruled the realm for 70 years and 214 days. Since the age of 25, she has been served by 15 Prime Ministers and endured great personal triumphs and sorrow.

Her Majesty, whose husband Prince Philip passed away in April 2021, was a mother to four children: Prince Charles, Princess Anne, Prince Andrew and Prince Edward.