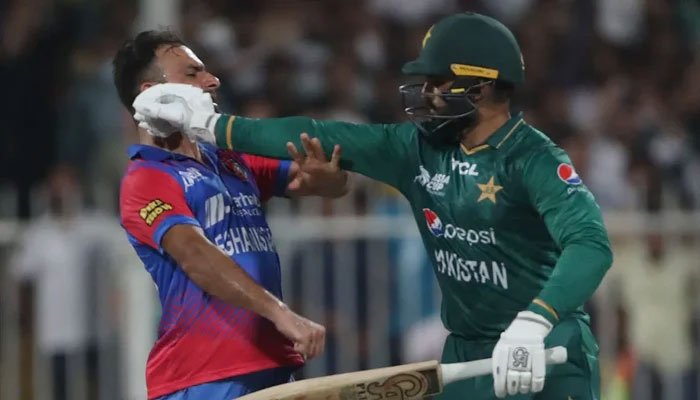 
Pakistan’s fierce batter Asif Ali and Afghanistan’s pacer Fareed Ahmad engaged in an altercation on the field as the latter sent the former back to the pavilion in the second last over of Wednesday’s Pakistan vs Afghanistan thriller in the Super Four stage match of the ongoing Asia Cup 2022.

The International Cricket Council (ICC) is looking into the matter and is likely to announce an official decision today on the penalties the two cricketers may face for the violation of the cricket body’s code of conduct.

Sources privy to the matter said that Asif Ali is feared to be slapped with the penalty for level 1 violation of the ICC code of conduct, which means he may get banned for a match or two.

What exactly happened between Asif and Ahmad

The two cricketers were involved in an intense exchange which began after Ahmad teased Ali after dismissing him.

In a video that went viral minutes after the instance, Ahmed is seen getting aggressive toward Ali first, after which he angrily raises his bat in the air as if trying to hit the Afghan pacer with it. This was the moment when the two had body contact.

The gravity of the matter was boosted as it was a crucial wicket as Pakistan had already lost nine wickets and the game seemed to be no longer in the bag for the side.

In the heat of the moment, Afghan player Fazalhaq Farooqi also quipped at Asif as he walked toward the pavilion.

Sources said that Match Referry Andy Pycroft summoned the two cricketers and held a hearing on the matter after the match. He informed the players about the fines for breaching Level 1 of the code.

Speaking to Geo News, senior sports journalist Abdul Majid Bhatti said that Pycroft is one of the strictest match referees on the ICC panel and both the players may get maximum punishment.

He said, for Afghanistan, Ahmed’s suspension doesn’t matter much as they are already out of the tournament. However, losing one of their the steadiest batters may get Pakistan into trouble as they seek to lift the Asia Cup trophy in the finale against Sri Lanka this Sunday (September 11).