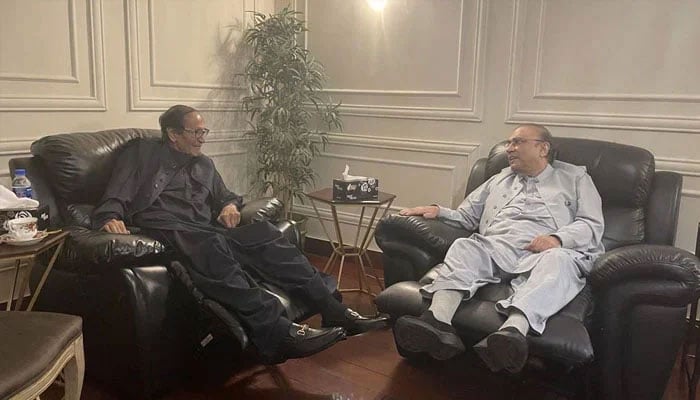 The two leaders, during the meeting, discussed matters of “mutual interests”, the county’s overall situation, Punjab’s current political situation, fear of assembly dissolution and other matters.

Federal minister Tariq Bashir Cheema and Rukhsana Bangash were among the attendees of the meeting.

Meanwhile, Chief Minister Punjab Chaudhry Pervez Elahi said that he did not see elections taking place in the next four months.

In an interview with a private news channel, he said: “Elections cannot be held before four months; the federal and provincial governments need time to work and the elections may be delayed even after October next year.”

Although the PML-Q leader had repeatedly said that he fully backs the PTI chief’s decisions, his statement is in contrast with Khan’s threats of dissolving the assembly soon.

In today’s interview, CM Elahi also reiterated that former chief of army staff (COAS) General (retd) Qamar Javed Bajwa had asked the PML-Q to side with the PTI.

“General Bajwa sahib asked us to support Imran Khan. God changed our paths which were headed to the PML-N (Pakistan Mulsim League-Nawaz) and sent General Bajwa to show us the way,” he said.

He added that the ex-COAS did not call PML-Q stalwart Chaudhry Shujaat.

The chief minister refuted Khan’s claim that the former army chief had asked a group of the party to side with the PTI and the other to support PML-N.

“I had called General Bajwa myself. The institution told me that it was better for me to side with Imran Khan,” the chief minister also said.