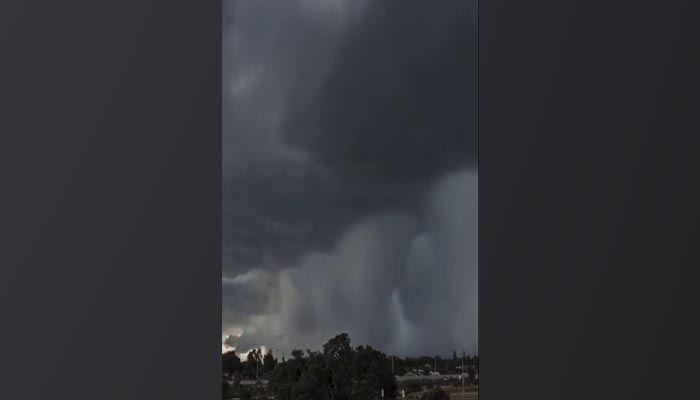 
JAMSHORO: Cloudburst hovered above Jamshoro on Friday as the city witnessed record downpour at 355mm.

Climate Change Minister Senator Sherry Rehman took to her Twitter to share the video, claiming that this was the heaviest ever rainfall recorded across Sindh in one day.

In a time-lapse video, which has now gone viral on social media, cloudburst appear drenching the city and setting a new record for heavy downpour in the span of 24 hours. The last heaviest rainfall recorded in Jamshoro within 24 hours was at 238mm on August 31, 2011.

“Today on 19 Aug 2022 we recorded the heaviest rainfall ever in one day all over Sindh,” she tweeted, crediting the Pakistan Metrological Department (PMD) for the video.

The minister deemed the cloudburst over Jamshoro “unprecedented” and mentioned how many areas witnessed non-stop rain for three days.

Earlier today, PMD predicted more rainfall across the country including warnings of flash flooding, particularly in Sindh and Balochistan, between August 19 and 24.

On August 23 and 24, rainfall with wind and thundershowers is expected to drench Sindh, south Punjab, south and northeastern Balochistan.

On the other hand, Karachi, Hyderabad, Thatta, Badin, Mirpurkhas, Shaheed Benazirabad, Dadu and Sukkur could also be impacted with urban flooding on August 23 and 24.

“Due to this weather system, monsoon currents are penetrating in upper and southern parts of the country,” a press statement by Met read.