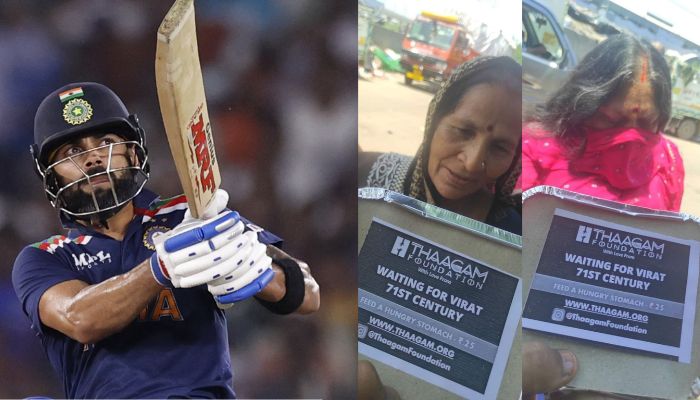 Former captain of Indian cricket team Virat Kohli has been struggling with his form. The star batter has scored 70 international centuries at the age of 33.

Pakistan skipper Babar Azam also backed Kohli, tweeting in his support. He said: “This too shall pass. Stay strong.”

His fans are very supportive and wish for his success. One of them has distributed packets of food, praying for the young cricketer’s 71st international century. The heart-warming gesture of the die-hard fan is going viral even though his identity has not been revealed.

A Twitter user named Pranshu Thakur shared the images of people in need holding boxes of meals that had Thaagam Foundation written over them.

In the caption, the user explained the scenario saying: “A Virat Kohli fan distributing food to hungry people so that his wish that Virat Kohli scores his 71st Century (comes true). Nice gesture from Virat’s fan and this is the crazy fan following of Kohli.”

India Times reported that Kohli’s last international century was in the Pink Ball Test against Bangladesh at the Eden Gardens in Kolkata where he scored 136 runs.