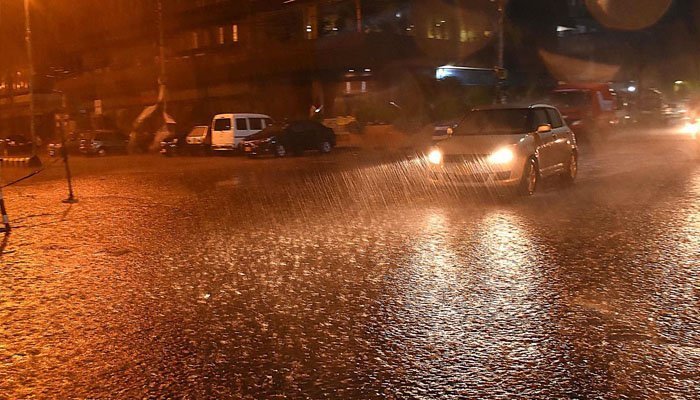 The Sindh Health Department has declared a health emergency in the province as another, almost identical rain producing system as the previous one, is getting close to Karachi, the Pakistan Meteorological Department (PMD) has warned.

The Met department said that heavy to very heavy rains are likely to hit Karachi and different districts of Sindh under this system by this evening (Thursday). The other districts that are likely to receive the wet spell with thunderstorm include Thatta, Badin, Mithi, Tharparkar, Umerkot, Islamkot, Mirpurkhas, Sukkur and Larkana.

Moreover, the intensity of the downpour is expected to be greater in Karachi on July 15 and 16.

In view of the heavy rains’ forecast, the Sindh Health Department has imposed a health emergency at all tertiary-care health facilities in Karachi and other cities of the province, directing the authorities to establish control rooms at all the district health offices and hospitals, The News reported.

Meanwhile, the PMD officials in Islamabad also warned that monsoon currents from the Bay of Bengal are continuously penetrating upper and central parts of the country. They said that Punjab, Kashmir, Khyber Pakhtunkhwa, Gilgit-Baltistan, eastern Balochistan and other parts of the country will also receive heavy rains from today.

As per the Met department, the rain producing system is so powerful that it can also cause heavy to very heavy rains in Zhob, Ziarat, Barkhan, Loralai, Bolan, Kohlu, Kalat, Khuzdar, Lasbela, Awaran, Naseerabad, Jaffarabad, Jhal Magsi, Dera Bugti, Sibbi, Panjgur, Turbat and Pasni, where the first spell has already caused widespread devastation.

In the wake of the heavy rains’ forecast, the National Disaster Management Authority (NDMA) has also issued instructions to the relevant federal ministries and departments, the provincial governments and their line departments to remain watchful and take all necessary precautionary measures to deal with any untoward situation.

An NDMA statement read that the relevant departments have been directed to ensure the pre-placement of emergency equipment, including dewatering pumps, and the availability of emergency personnel to respond to any emergency, especially in case of any blockage, road closure or damage in major cities like Karachi.

The NDMA has directed the authorities to ensure timely evacuation of the population from low-lying and flood-prone areas in accordance with the evacuation plans and ensure the availability of shelter, food and medicines at camps.

It also urged the relevant authorities and departments to conduct mass public awareness and alert the population about the possible risks associated with the monsoon rains and advise them against unnecessary travelling.

It asked the provincial authorities to instruct the law enforcement agencies, along with the traffic police, to guide travellers and tourists about likely situations as well as the dangers of waterlogged areas and underpasses while advising them against unnecessary movement.