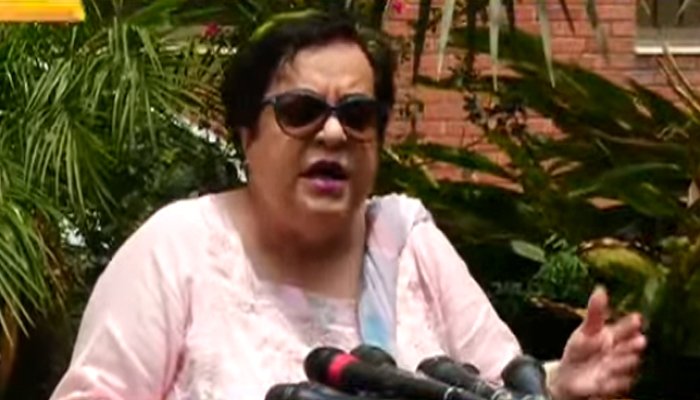 Shireen Mazari asks ‘handlers of govt’ what their ‘eventual aim’ is

PTI leader Shireen Mazari on Thursday asked the “handlers of this government” what their “eventual aim” is.

She was speaking to journalists after a meeting of the judicial commission tasked with probing her arrest in May.

While briefing the media on her views regarding the current political situation in the country, the former human rights minister said: “This message should go to the handlers of this government – the sovereignty and security of Pakistan is of utmost importance. Was giving them (current rulers) an NRO the objective of the regime change?”

“It seems so because we see one NRO after another in cabinet decisions. They have only come to get an NRO. They are deliberately destroying the economy to weaken the country which is what the US wants and so this is where their interests converge,” Mazari continued.

The PTI leader said that the institutions whose task it is to defend Pakistan “should defend it rather than work with the imported government to destroy Pakistan”.

Pressing on, she added: “So what is your eventual aim? Do we wish to accept Israel, trade with India, forget Kashmiri lives lost? Or do you wish for Pakistan to get back on the strong, independent, sovereign track that Imran Khan had put it on?”

“On the say so of the US you did a regime change and halted this progress and put Pakistan on the path to destruction, the path that saves these NRO-seeking corrupt people.

“Please think about this again,” she said.

Former prime minister Imran Khan has continued to insist that his removal through a vote of no-confidence was a “regime change conspiracy” due to what he says is his “independent foreign policy”.

To a question about criticism of the military and related legislation, she said that she clarified a day earlier as well that the cabinet had rejected a clause in the criminal law reform bill put by Farogh Naseem which “provided such protection that anyone even taking the military’s name would be jailed for five years”.

“Because the cabinet rejected the clause, Farogh Naseem did not even table the bill,” she said.

The former minister said that there was a private member bill by Amjad Niazi, which was approved by the interior committee but it was not presented in the assembly for voting “because the government had told him they do not accept it”.

“Private member bills do not go to the cabinet, even if it is a member of the ruling party,” she explained.

Speaking of the current government, Mazari said the assemblies are “a joke now because the largest party has exited them”.

“We believe an election date should be given so that whatever steps that need to be taken to fix the economy are taken. These guys have destroyed the economy in three months,” the PTI leader said.

“Once a date of election is provided, much can be done, talks can be held and things can be discussed,” she said.

She went on to claim: “People have stood up in support for Imran Khan and they have rejected this imported government. Wherever rallies are being held, people are coming out in droves despite rain to support Imran Khan.”

A judicial commission has been formed to probe the arrest of Mazari which took place in May and which has been declared unlawful by the Islamabad High Court.

The commission in its meeting today reviewed the terms of reference of the probe.

Mazari said the commission noted that they had not received any police report regarding her arrest and that “it was not an arrest, it was kidnapping”.

She said the next meeting will take place on July 14 to which the inspector general of police for Islamabad has been summoned.

“We are confident the commission will fully investigate who was involved in this and hope that there will be accountability at the end, so that such incidents do not happen again,” Mazari said.

Mazari said the commission read out the terms of reference and provided her a copy as well. “By and large we are satisfied with the TORs,” she said.