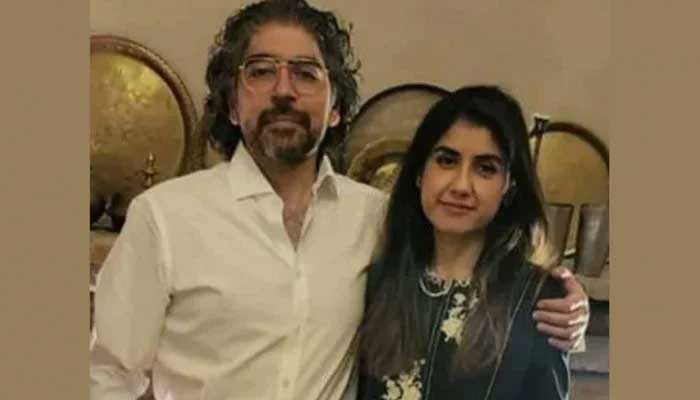 
ISLAMABAD: Sameena Shah, mother of prime suspect Shahnawaz Amir, on Saturday condemned his son for allegedly killing his wife, Canadian national Sarah Inam, and said that he “must be punished for what he did”.

Talking to journalists after being granted an extension in interim pre-arrest bail, Shah said that she did not know when a conflict developed between the couple.

Responding to a question, she said that Ayaz Amir had been making telephone calls to him after the incident but her phone was in the room. “He talked to me on Shahnawaz’s phone and asked me to hold him. He said that he has informed the police.

“I was in shock. I asked Shahnawaz to sit in the other room and waited for the police,” she revealed the details.

Shah said that she handed over his son to the police officials when they reached the home.

“I could have helped him escape but his father instructed me to tie him with rope,” she added.

Replying to another question, she said that Shahnawaz did not say anything to him and shut the door.

Earlier, a district and sessions court in Islamabad on Saturday extended the interim pre-arrest bail of Sameena Shah, mother of prime suspect Shahnawaz Amir, till October 3 in the murder case of Canadian national Sara Inam.

Shahnawaz allegedly killed his wife Sarah at home after a row over a family issue on September 23.

Shahnawaz — who was detained by the police from a farmhouse in Islamabad’s Chak Shahzad area for being a suspect in his wife’s murder — confessed to committing the crime and said that he “thought” his spouse was having an affair with someone else. The couple was married for just three months.

In the police report registered following the murder, an additional clause of Section 109 (punishment for abetment) of the Pakistan Penal Code was added at the request of Sarah’s uncles — Colonel (retd) Ikram and Zia-ur-Rahim — who have blamed Amir and his former wife for their niece’s murder.

The petitioners maintained that Sameena has been living at the farmhouse where Sarah was murdered.

On September 26, the court accepted the pre-arrest bail plea of Sameena Shah against a surety bond of Rs50,000 and directed her to join the probe.

At the outset of today’s hearing, the investigation officer presented the record before the court of Additional Sessions Judge Sheikh Muhammad Sohail.

Sameena Shah accompanied by her lawyer, Arsal Amjad Hashmi, appeared before the court.

During the course of proceedings, the counsel informed the court that the suspect sent a WhatsApp message to his client on September 23 at 00:37 am, urging her to talk with Sarah’s family about “Rukhsati”.

Later, Sameena Shah went to sleep and she did not know what happened in the night, argued the lawyer.

“She was in the kitchen, which is located at some distance from the room, when the suspect made a telephone call to his mother at 9:12 am,” the lawyer added.

When she reached the crime scene, Sarah Inam had died, he added.

“The role of the suspect’s mother was only that she made a telephone call from Shahnawaz’s room,” said her lawyer.

Meanwhile, the court granted extension in interim bail till October 3 to Sameena Shah and adjourned the hearing.

The FIR mentioned that the suspect’s mother, Sameena Shah, called the police on Friday (September 23) to inform them that her son, Shahnawaz, had killed his wife with a dumbbell.

According to the FIR, Sameena told the police that her son was in the house and had hidden the body of his wife. Following this, the police raided the house.

In the complaint, the police said that Shahnawaz had locked himself inside his room and when the personnel broke inside, there were blood spots on his hands and clothes.

Once the police got hold of Shahnawaz, he, according to the FIR, confessed to hitting his wife repeatedly with a dumbbell during an argument and then later hiding the Canadian national’s body in the bathtub.

The “murder weapon”, the FIR quoted Shahnawaz as saying, was hidden under his bed. Police, after examining the dumbbell, reportedly found blood and hair on it. They later sent it for forensics.