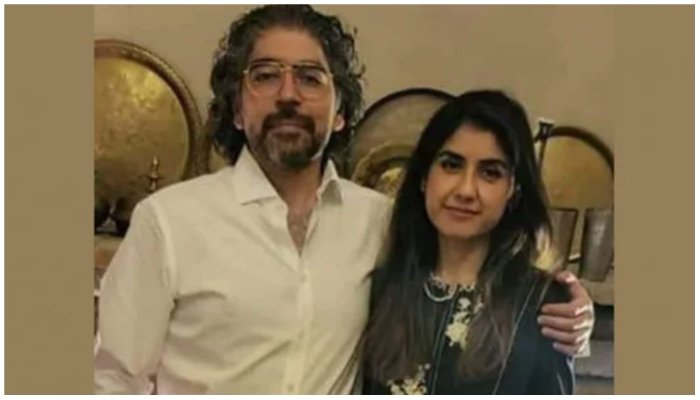 
The parents of Sara Inam, who had allegedly been killed by her husband Shahnawaz Amir — the son of renowned journalist Ayaz Amir — have arrived in Pakistan from Canada.

According to police sources, the father of the victim Engineer Inam-ur-Rehman and his wife reached Islamabad to claim the body of their daughter and perform her last rites.

Sara’s funeral prayers will be performed on September 28 after Zuhr in Shehzad Town, Islamabad.

Earlier today, a local court in the federal capital extended the physical remand of senior journalist Ayaz Amir, who had been arrested a day prior, and Shahnawaz for one and three days, respectively, in the murder case of Sara, who was a Canadian national.

Shahnawaz allegedly killed his wife Sara at home after a row over a “family issue” on September 23.

Shahnawaz — who was detained by the police from a farmhouse in Islamabad’s Chak Shahzad area for being a suspect in his wife’s murder — confessed to committing the crime and said that he “thought” his spouse was having an affair with someone else. The couple was married for just three months.

On Saturday, the trial court approved the arrest warrants of Amir and his former wife Sameena Shah, as the two were nominated as suspects by Sara’s family.

Amir has been arrested while his former wife has sought pre-arrest bail. Later on Sunday, a district and sessions court in Islamabad granted police one-day physical remand of Amir.

In the police report registered following the murder, an additional clause of Section 109 (punishment for abetment) of the Pakistan Penal Code was added at the request of Sara’s uncles — Colonel (retd) Ikram and Zia-ur-Rahim — who have blamed Amir and his former wife for their niece’s murder.

The petitioners maintained that Sameena has been living at the farmhouse where Sara was murdered.

The police presented Amir, and Shahnawaz before senior civil judge Muhammad Aamir Aziz’s court after completion of their physical remand.

At the outset of the hearing, Amir maintained that he will fight his case himself.

“I was in Chakwal at the time of the incident. I personally informed the police about the matter,” he said, adding that since the inspector-general wasn’t present, the SP was informed.

He said that he joined the investigation from the moment the police registered the case. The petitioners should show some evidence for the allegations levelled against him, Ayaz argued.

During the hearing, the investigation officer informed the court that police have to recover the passport and the amount that the prime suspect had been taking from the victim. They requested the court for a seven-day extension in both suspects’ physical remand.

However, the court remanded Amir and Shahnawaz into police custody for one and three days, respectively.

Meanwhile, an additional sessions court judge accepted the pre-arrest bail plea of Shahnawaz’s mother Sameena Shah against a surety of Rs50,000 and directed her to join the probe within three days.

The court remarked that there is no allegation against Sameena as per the FIR.

Amir’s ex-wife Sameena Shah approached the court for bail to avoid arrest in the murder case earlier in the day.

Filing for bail, Sameena maintained that Shahnawaz messaged her on WhatsApp about a rukhsati [when a woman formally moves out of her home to live with her husband]. She further stated that her son called her at 9:12am to tell her about the murder.

“I rushed towards the room, but Sara had been murdered by then. I told Shahnawaz to stay in the room while Amir informed the police,” Sameena stated in the plea.

She said that the Islamabad Police reached the crime scene within minutes of being informed.

Sameena requested the court to accept her pre-arrest bail plea, claiming that neither is she linked to the murder in any way nor is she an eyewitness of the crime. She also cited health issues while seeking bail.

The FIR mentioned that the suspect’s mother, Sameena Shah, called the police on Friday (September 23) to inform them that her son, Shahnawaz, had killed his wife with a dumbbell.

According to the FIR, Sameena told the police that her son was in the house and had hidden the body of his wife. Following this, the police raided the house.

In the complaint, the police said that Shahnawaz had locked himself inside his room and when the personnel broke inside, there were blood spots on his hands and clothes.

Once the police got hold of Shahnawaz, he, according to the FIR, confessed to hitting his wife repeatedly with a dumbbell during an argument and then later hiding the Canadian national’s body in the bathtub.

The “murder weapon”, the FIR quoted Shahnawaz as saying, was hidden under his bed. Police, after examining the dumbbell, reportedly found blood and hair on it. They later sent it for forensics.