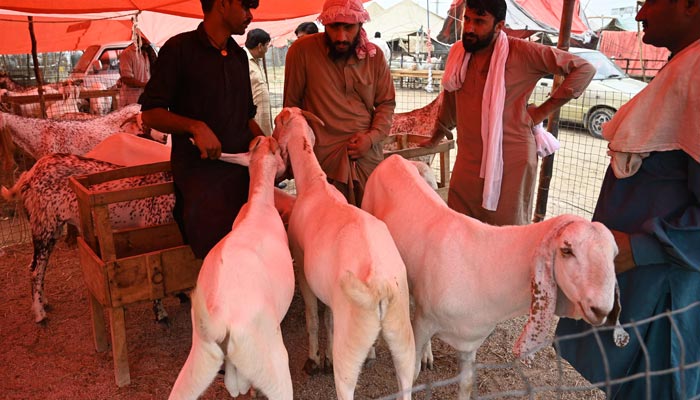 RAWALPINDI: Business was quieter than usual at one of Pakistan’s biggest livestock markets Friday as an economic crunch stopped customers from splashing out on cows, sheep and goats for the Eid ul Adha.

Farmers have been camped at the I-15 cattle market between Islamabad and Rawalpindi for two weeks, hoping to sell their stock ahead of the holiday, which starts Monday, but buyers are scarce.

Pakistan’s economy is in the doldrums, with rampant inflation affecting everything — including Eid spending.

Muhammad Mumtaz, who brought 50 animals to market, still had 30 left to sell.

“Inflation is so high that customers do not have the purchasing power,” he told AFP as he sat on a wooden bed.

“We can’t sell them cheaply,” he added.

Like Muslims elsewhere in the world, Pakistanis usually buy an animal for slaughter over Eid ul Adha, keeping a third for themselves, a third for friends and relatives, and a third for charity.

He said his extended family usually bought two cows for the occasion, but this year had cut down to one.

The farmers spend time cleaning and grooming the animals, festooning them with floral garlands in the hope of attracting customers.

“Most people are not sacrificing animals because of the prices,” said farmer Mulazim Hussain.

— Thumbnail and header image taken from AFP show Pakistani livestock vendors sitting next to their animals at a livestock market in Islamabad on July 8, 2022, ahead of Eid ul Adha