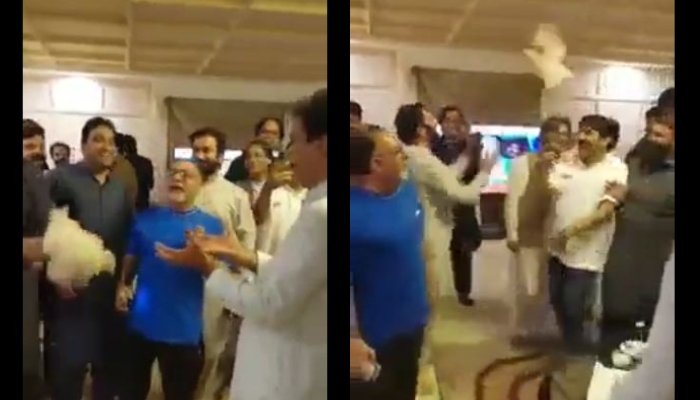 PTI receives backlash for tossing chicken around to celebrate win

A chicken was subjected to abuse after a group of PTI workers tossed it around to celebrate their party’s victory in the Punjab by-elections on July 17.

In the bizarre video making rounds on the internet, some of the party leaders could be seen throwing the poor bird at each other and catching it while chanting slogans. The brutal act was carried out to mock Punjab Chief Minister Hamza Shahbaz, as he is referred to as kukri (chicken) by his political opponents.

The PTI had won the Punjab by-polls on 20 constituencies, out of which the party won 15 seats against the PML-N, which managed to secure only four.

The party leaders could be heard chanting “Hamza, Hamza” while throwing the chicken around.

In the past, PTI workers had also been criticised for manhandling a donkey, who was brutally beaten and bruised by the supporters during a jalsa.

The animal had become a target of violence by the party supporters who wrote the name of a rival group on the donkey’s body to elude him.

Mob harass foreign tourists in federal capital on Independence Day
Over 40,000 Pakistani students celebrate their CIE results
Govt jacks up petrol price in Pakistan by Rs6 for the next 15 days of August