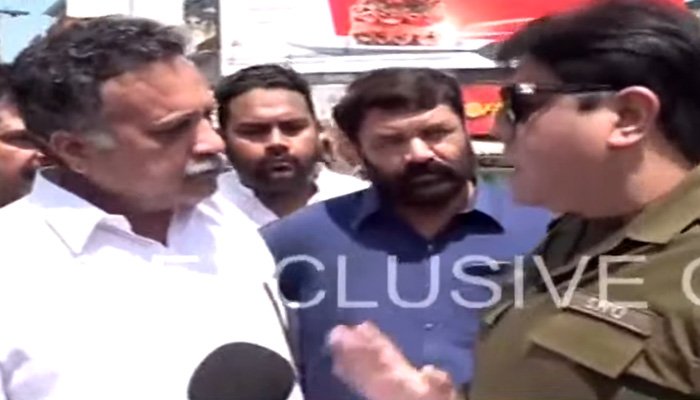 LAHORE: PTI leader Maqbool Gujjar Saturday reached Lahore in violation of a ban imposed on him by the Punjab government to ensure peace amid the by-polls in 20 constituencies.

The Punjab Home Department had banned PTI leaders Ali Amin Gandapur and Maqbool Gujjar from entering the province. According to the notification issued on Friday, both the leaders will be barred from entering Punjab from July 15 to 18 to ensure law and order in the upcoming by-elections.

In this regard, Provincial Home Minister Ata Tarar had said that there were reports and the ECP had received a letter saying that they wanted violence during by-elections.

Maqbool Gujjar, a minister in the Azad Kashmir government, was speaking to Geo News when police reached the spot to take him into custody.

The PTI leader told SHO Atif Khan that he was a minister and can not be stopped.

After this, the policeman asked him to come to the police station but Maqbool Gujjar fled from the scene.

The police, however, managed to arrest three people travelling with Maqbool Gujjar.

When contacted, a police official said that this is a violation of the order and the PTI leader will be arrested for breaking the law.

The interior minister said that he has received reports that over 500 miscreants of the party have been brought to Punjab to sabotage the elections process.

The plea seeking permission for appointing polling agents hailing from outside the concerned constituency was part of the conspiracy, Sanaullah added.

“Imran Khan has lost elections and preparing to fight with the masses,” he said and warned Imran Khan and the PTI’s tiger force to keep themselves within the ambit of the law.

“The law will take its due course if anyone tries to sabotage the writ of the state by indulging in unlawful activities,” he warned.