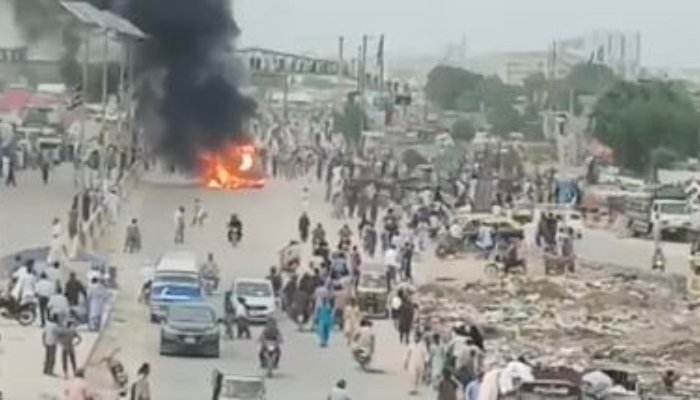 KARACHI: Protests broke out in the port city’s Sohrab Goth area Thursday, suspending the traffic at the M-9 motorway after a boy was murdered at a hotel in Hyderabad.

The protestors have staged a sit-in at the city’s Gulzar-e-Hijri area, where they reportedly pelted stones at vehicles, heavily damaging them. Many people have also vandalised the police post situated at Karachi’s Al-Asif Square.

Sindh Chief Minister Murad Ali Shah, taking notice of the incident, warned the protestors to behave, saying that the government knows how to maintain peace.

CM Shah said that criminals have no religion, no nationality, and no language and that “they are terrorists, killers, and enemies of humanity, therefore, we should deal with them accordingly.”

The chief minister said that blame for the incident cannot be shifted to a particular segment of society as he urged the masses not to take law into their own hands. “I know how to protect the peace and people of this province,” he added.

“This is not the time to fight each other. This is a conspiracy which will be dealt with,” added the CM.

CM Murad directed the police and district administration to disperse the protesters peacefully.  The police said it had arrested several protesters while dispersing others using batons.

According to traffic police, the traffic moving from Hyderabad to Karachi was being diverted to an alternative route while the buses arriving in Karachi from other cities in Sindh dropped the passengers at the Sabzi Mandi.