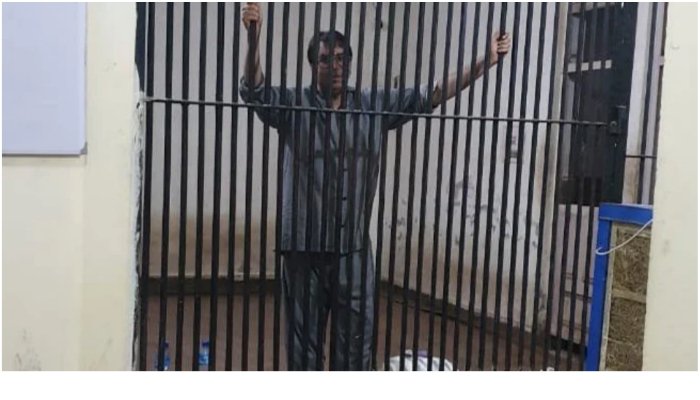 In the snapshot, which was posted to Gill’s official Twitter account by his team, the PTI stalwart could be seen standing behind bars, dressed up in a prison uniform.

In the caption, his team added poetry which translates to: “It is not for me to obey the oppressor; Rebellion is written in my history.”

Gill was taken into custody for allegedly visiting different polling stations during the by-elections in Muzaffargarh with his security guards, who were dressed as FC personnel.

As per the election code of conduct for political parties and candidates, the Election Commission of Pakistan (ECP) has stated: “Carriage and display of all kinds of lethal weapons and firearms shall not be allowed in public meetings and processions and official regulations in respect thereof shall be strictly observed. Aerial firing, use of crackers and other explosives at public meetings shall not be allowed.”

However, Gill denied the allegations of keeping any security guards dressed up in FC officials’ uniforms. He claimed that he had been busy for three hours and was suddenly arrested without a warrant.

The politician said that he will act according to what his lawyers suggest. At the time of his arrest, Gill was all smiles and did not look worried at all.