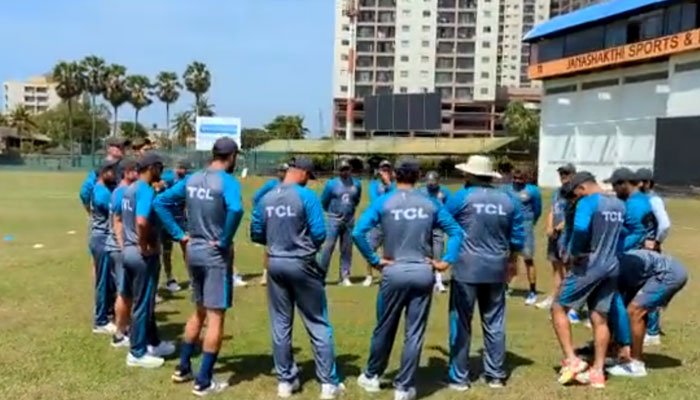 KARACHI/COLOMBO: the Pakistan Cricket Team was forced to cancel its practice session scheduled for Saturday after Sri Lankan police imposed a curfew in some areas of Colombo ahead of violent protests against the government.

An official of the Pakistan team confirmed that the practice session was cancelled due to the political situation in the country.

“Pakistan’s training session at P Sara Oval for tomorrow has been cancelled,” said Ahsan Iftekhar Nagi, the media manager of the touring Pakistan team from Sri Lanka on Friday night. He confirmed that the session was called off due to the curfew that was imposed on Friday night.

According to media reports from Sri Lanka, police had fired tear gas and used water cannons against an anti-government protest by students.

A massive protest is also planned in the county on the weekend.

An indefinite curfew was imposed across Sri Lanka’s capital Friday and the military was placed on alert ahead of a planned rally demanding the ouster of embattled President Gotabaya Rajapaksa.

Police chief Chandana Wickramaratne said Colombo and its suburbs would be under a blanket curfew from 15:30 GMT until further notice and urged residents to remain indoors.

The order came as thousands of anti-government protesters poured into the capital Friday ahead of Saturday’s rally to pressure Rajapaksa to quit over the country’s worsening economic crisis.

The island nation is suffering from an unprecedented shortage of essentials, and its 22 million people have endured runaway inflation and prolonged blackouts since the start of the year.

Demonstrators have, for months, been camped outside Rajapaksa’s Colombo office to demand his resignation for economic mismanagement.

Thousands of soldiers armed with assault rifles were bussed into Colombo earlier in the day to reinforce police guarding Rajapaksa’s official residence, which anti-government protesters have vowed to storm on Saturday.

“An operation involving nearly 20,000 troops and policemen and women was launched this afternoon,” a top defence official told AFP. “We are hoping that tomorrow’s protest will not become violent.”

He said more troops were brought into the capital from the provinces after at least three judges refused to outlaw Saturday´s protests.

The United Nations urged both the Sri Lankan authorities and the protesters to ensure that Saturday’s demonstrations went off peacefully.

“We urge Sri Lankan authorities to show restraint in the policing of assemblies and ensure every necessary effort to prevent violence,” the Office of the UN High Commissioner for Human Rights said.

Nine people were killed and hundreds wounded when clashes erupted across the country after Rajapaksa loyalists attacked peaceful protesters outside the president’s office in May.

Sri Lanka has defaulted on its $51 billion external debt and has been in bailout talks with the International Monetary Fund.

— With additional input from AFP.