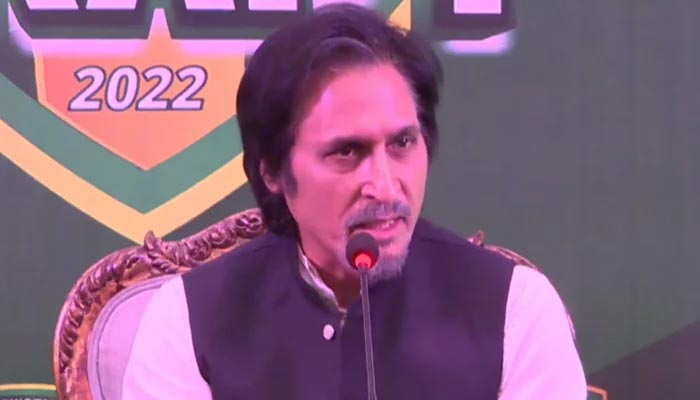 “You don’t identify hooliganism with cricket and this is unacceptable,” Raja, the former Pakistan player turned board chairman, said.

“This game doesn’t want such an environment. The visuals were really bad. This wasn’t the first time such a thing happened. Emotions should be kept in check, we own our fans and we lodge a protest with the ICC (International Cricket Council).”

Pakistan beat Afghanistan after Naseem Shah hit two sixes off Fazalhaq Farooqi in the final over of the match to take the team into Sunday’s final of the T20 tournament.

Trouble started when Afghanistan pace bowler Fareed Ahmad had a heated exchange with Pakistan’s Asif Ali after giving the batsman a send-off following his dismissal.

An angry Asif gestured in the direction of Fareed with his bat before players intervened along with the umpire to defuse the tension.

The rising tempers shifted from the field to the stands with videos circulating of Afghanistan fans ripping off seats and throwing them at fans in Pakistan shirts.

Former Pakistan bowler Shoaib Akhtar tagged a video and tweeted: “This is what Afghan fans are doing. This is what they’ve done in the past multiple times.

“This is a game and it’s supposed to be played and taken in the right spirit. @ShafiqStanikzai your crowd and your players both need to learn a few things if you guys want to grow in the sport.”

“You can’t control the emotions of the crowd and such incidents happened in the world of cricket multiple (times), you should go ask Kabir Khan, Inzimam Bhai and @iRashidLatif68 how we treated them,” he tweeted.

AFP contacted the Sharjah cricket authorities and the Emirates Cricket Board to verify the videos but did not get any response.

How many grand slams has Djokovic won and how?

Akmal says Azam should follow Graeme Smith’s example
'Love hormone? Not so fast'
US trade shifts on COVID and China tensions, but no ‘decoupling’ yet