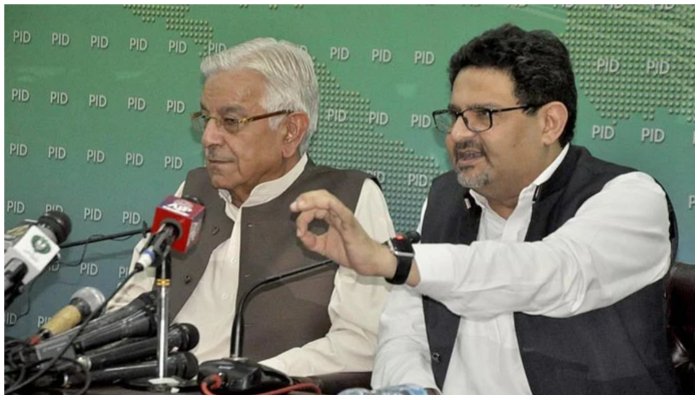 
ISLAMABAD: Defence Minister Khawaja Muhammad Asif on Wednesday berated PTI Chairman and former prime minister Imran Khan for issuing defamatory statements against state institutions and said that “no one had the right to do so.”

Asif, while speaking during a joint press conference along with Finance Minister Miftah Ismail, said that the politicisation of institutions — including the Pakitan Army — was highly objectionable.

He added that Khan has often “used state institutions to build his own political narratives.”

Asif further stated that Khan first issues a controversial statement and later retracts it. “To save face, the former premier then camouflages his statements with excuses of context and merit.”

Commenting on the matter of appointments made on merit in the army, the minister said that all appointments and promotions in Pakistan Army are based on worth and attributes.

“Imran Khan should say if any appointments in the army weren’t done on merit,” he said, questioning Khan if he appointed anyone on merit — including Punjab and Khyber Pakhtunkhwa’s chief ministers — during his tenure.

The minister claimed that Khan’s own party had disowned him.

“PTI members deny knowing anything when asked what Imran Khan said a day before,” he said, adding that whether a statement is good or bad, one has to comment or defend it [as a party representative].

Speaking regarding the Toshakhana Reference, Asif said that the government has sent recommendations and asked Khan to appear before the courts.

“We have completed inquiry regarding the £180 million,” he said, adding that the former premier’s “corruption is under investigation” and that the matter has gone too far.

For his part, Finmin Ismail criticised the PTI chief for bringing Pakistan to the brink of default.

Miftah said that the coalition government was struggling to revive the country’s economy and restore electricity, and other development projects which remained halted during Khan’s tenure.

The finance minister termed the “unwise policies” of PTI’s government as the reason behind the hike in petroleum and electricity prices.

Prices of commodities coming down

During the presser, Miftah hinted that the inflation rate will slow down in the coming month.

“The nation would have to bear the higher rates for one more month”, he said.

Miftah deemed Khan’s inability to follow commitments made with the International Monetary Fund (IMF) as the cause behind Pakistan’s economic instability and skyrocketing inflation, particularly with regard to subsidies on gas, petroleum products, and electricity.

The finance minister further said that during Khan’s rule, the IMF ensured that no amnesty would be given to businessmen and no subsidies would be placed on petroleum, gas and electricity; however, the then-government went against its commitments.

Miftah maintained that prices of petroleum products were linked directly to the international market, which is why it was difficult to predict future prices.

The minister also acknowledged the increasing rates of commodities, including vegetables such as tomatoes and onion, following the recent flooding across Pakistan.

He assured the masses that the prices were decreasing now.

Miftah also said that the government was in contact with the IMF regarding the devastation caused by the floods in the country.

He added that the flood’s damage needs assessment wasn’t yet finalised and that the government was working alongside the World Bank to ensure the provision of a reliable and accurate assessment of losses incurred in the aftermath of the calamity.

Responding to a question regarding trade with India, Miftah shared that the All Pakistan Textile Mills Association (APTMA) was asking the government for permission to import cotton from India; however, the government has not yet taken any decision on the matter.

He confirmed the import of tomatoes and onion from Afghanistan and if this helps stabilise the market, Pakistan would not need to import anything from India.