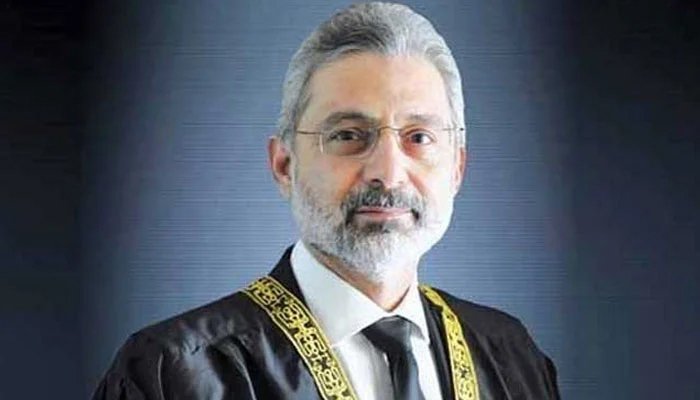 Supreme Court Justice Qazi Faez Isa has taken an exception to the summoning of Judicial Commission of Pakistan (JCP) meetings for the appointment of new judges to the Sindh High Court (SHC) and Lahore High Court (LHC) in his absence.

Justice Isa said he learnt, through the media that two meetings of the JCP have been called on June 28 and 29, respectively, to consider the nominees to the Sindh High Court (SHC) and the confirmation of the additional judges of Lahore High Court (LHC).

“Neither the Hon’ble Chief Justice of Pakistan (HCJP) nor Jawad Paul, the Secretary of the JCP (the Secretary), informed me of these meetings,” the justice said, who has earlier called for the dismissal of the incumbent secretary.

He said that his private secretary took photos of the secretary’s letters which he WhatsApped him, and photos of the accompanying three large boxes of documents, presumably containing the particulars of the nominees and specimens of their work.

Justice Isa said he takes “great exception” to the manner in which these JCP meetings have been called and that it has become tiresome to keep repeating the details of the “manipulative and illegal” conduct of the secretary.

“Serious concerns expressed verbally and in writing, about the secretary remain unaddressed; the courtesy of a reply is not even extended. Is this disdain, arrogance or a flaunting of unaccountability? And, does such conduct strengthen and build institutions or weaken and destroy them?” he asked.

Moving on, the justice raised 19 points as to why the JCP meetings should not have been called:

The senior judge then said that the people of this great nation deserve much better and let “us not play with their destiny. Let us be allowed to do our constitutional duty properly and with due deliberation”.

Therefore, Justice Isa said, it would be appropriate to postpone the meetings of the JCP till after the SC vacation.

He said it would also give all JCP members the possibility to participate, and after having had the opportunity to examine the documents in the said five boxes.

“They would also have the requisite time to make enquiries about the proposed nominees,” he said.

“However, if we must persist in the folly of acting arbitrarily and ensuring packing of courts, then please arrange for a video link facility for me from Spain so I can further record my objections to the illegal convening of these meetings,” he requested.

In the end, he also apologised for communicating through WhatsApp but noted that it is the only medium he could manage from Spain.