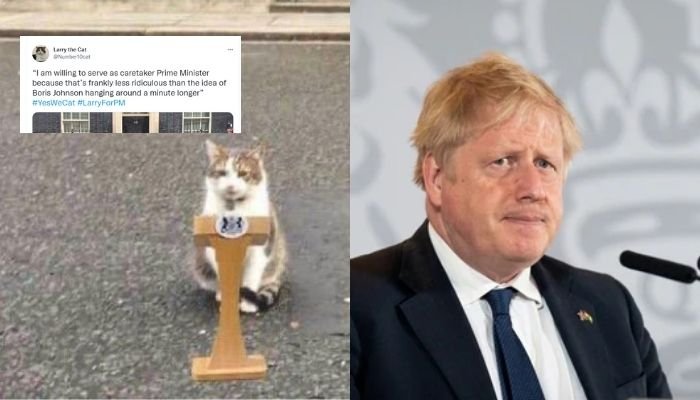 With the resignation of British Prime Minister Boris Johnson, the UK needs an acting leader. The internet believes Larry the Cat could do the job.

Videos circulating on social media show Larry wandering around 10 Downing Street in London waiting at the gate of the Prime Minister’s Office.

One of the videos by BBC shows a reporter covering Downing Street just before Johnson’s statement to the media. The cameraman zooms on the cat.

“Are you asking him to resign Larry?” a man is heard shouting.

The video led to people actually considering voting for Larry as Prime Minister.

A user said: “Personally I think we should vote Larry as prime minister. He’d do a better job than any Tory…”

Soon enough, Larry the Cat too joined Twitter. The account hilariously covers the political crisis in the UK.

“I am willing to serve as caretaker Prime Minister because that’s frankly less ridiculous than the idea of Boris Johnson hanging around a minute longer,” Larry said in a tweet.

The tweet carried a picture of the cat with a photoshopped tiny podium.

As the nation waited for the announcement, Larry wrote: “If Boris Johnson hasn’t resigned by 10am I will be forced to crap in his shoes.”

He followed it up by taking credit for the announcement. “That did the job. No need to thank me.”

Johnson was ridiculed in the parliament where members of the Conservative Party asked him to resign and some even laughed at him, after which he put in his papers.