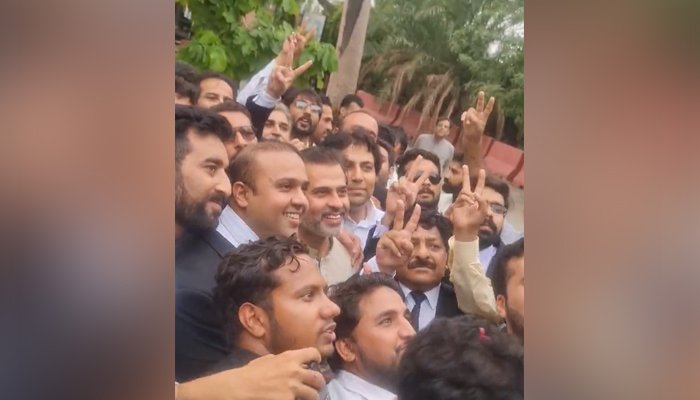 LAHORE: Anchorperson and journalist Imran Riaz Khan on Saturday received bail in a case registered against him in Chakwal from the Lahore High Court (LHC).

A local court in Attock granted relief to the journalist in the early hours of Thursday, where it dismissed a treason case against him and ordered Khan’s immediate release.

But the relief was short-lived as Chakwal police were waiting outside for him and they arrested the anchorperson as soon as he came out of the courtroom.

Today, however, he has secured bail from the LHC in the case registered against him in Chakwal on personal bail bonds. The case was lodged against Khan for speaking against institutions.

The anchorperson was also relieved in a similar case lodged against him at Lahore’s Civil Lines Police Station as a judicial magistrate discharged him from the case.

The hearing in LHC

In today’s hearing, LHC Justice Baqar Najafi told Khan that he “was not looking good in a beard”. At this, the anchorperson replied that he would cut it off tomorrow after his sacrifice for Eid ul Adha is completed.

“Your lawyer has assured us that you will not issue statements which will make matters worse,” the justice said.

Khan responded that every court he has gone to had provided relief to him.

“Don’t make us (the courts) controversial,” the justice said.

The anchorperson then assured the court that he will not issue any statement that would make matters worse for him.

After this, Justice Najafi approved Khan’s bail and adjourned the hearing till July 19.