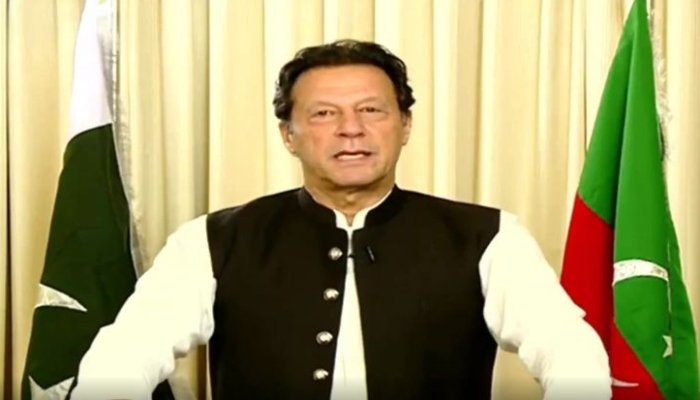 LAHORE: Former prime minister and PTI Chairman Imran Khan on Thursday warned of extreme public reaction if the elections for the Punjab chief minister are not carried out democratically.

Addressing his party workers in a televised speech, Khan  said if things are not done in a democratic manner, then people’s reaction would not be in his control as the nation is now aware and enlightened and “they will not sit silently.”

“If people’s mandate is stolen in the Punjab Assembly tomorrow during the chief minister election, then I am warning that the country would head towards a condition like Sri Lanka and after that, whatever happens, it would not be my responsibility,” said the ex-premier.

The PTI chairman said that if the mandate of the people is respected in tomorrow’s, election then tomorrow “we will thank Allah and celebrate.”

He added that when PTI’s government will come into power after the chief minister’s election tomorrow, then all those who broke the laws and Constitution and wronged PTI workers, supporters, and leaders will be punished.

‘Those who conducted Punjab by-polls should be punished’

He expressed his anger with the Election Commission of Pakistan (ECP) even after winning the by-election, adding that those who conducted the Punjab by-election should be punished.

Accusing Chief Election Commissioner (CEC) Sikandar Sultan Raja of being biased, the PTI chairman said that he has never seen a “dishonest” election commissioner like him before.

Khan, highlighting the alleged wrongdoings of the CEC, said: “We [PTI] continued lodging complaints about rigging but the ECP did not pay heed.”

“We do not want to contest the general elections under the leadership of the incumbent chief election commissioner,” he said, adding that if the biggest political party of Pakistan [PTI] doesn’t trust the CEC, then “he should resign.”

He further added that the PTI, during its tenure, emphasised the adaption of the electronic voting machine (EVM); however, all those who are now in the government opposed the suggestion because “they knew that with the help of EVMs, nearly 130 methods of rigging could be eliminated.”

The PTI chairman reiterated that those who conducted the by-elections in Punjab should be punished as they used all tactics to defeat the PTI.

Khan highlighted that the ECP postponed the local body elections in Sindh due to a rain forecast, however, similar requests for deferring the LG polls in Khyber Pakhtunkhwa were turned down. “this CEC has taken all steps that go against the PTI.”

He further the CEC of being biased during the Daska by-elections last year, saying that he had ordered re-polling on the seat to ensure the PTI’s defeat.

“This election watchdog chief also turned a blind eye to Supreme Court’s orders on our plea in the Senate election case,” Khan noted.

“Everybody knows that the PTI has full numbers for the CM election tomorrow, therefore, they are trying to use their money,” he said.