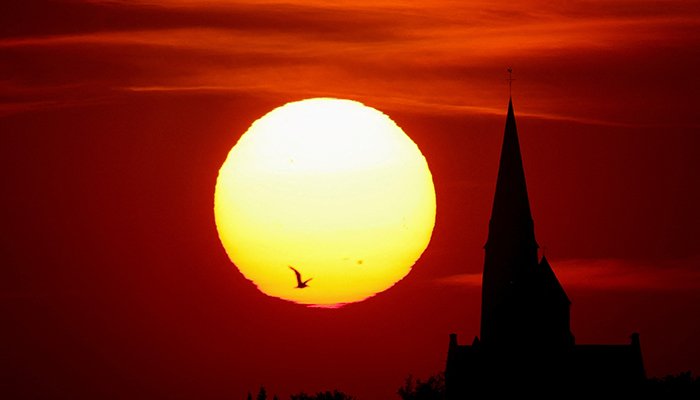 LEIRIA/LONDON: Hundreds more people were evacuated from their homes as wildfires blistered land in France, Spain and Portugal on Friday, while officials in Europe issued health warnings for the heatwave in the coming days.

More than 1,000 firefighters, supported by water-bomber aircraft, have battled since Tuesday to control two blazes in southwestern France that have been fanned by scorching heat, tinder-box conditions and strong winds.

While temperatures dipped a little in Portugal, they were still expected to top 40 degrees Celsius (104 Fahrenheit) in some places, with five districts on red alert and more than 1,000 firefighters tackling 17 wildfires, authorities said.

In Spain, the Environment Ministry said it was helping tackle 17 wildfires across the country.

Meanwhile, the worst drought in over 70 years reduced Italy’s longest river, the Po, to little more than a trickle in places.

Italy has declared a state of emergency along the Po, which supports about a third of the country’s agricultural production, after facing its hottest July since 1800, with temperatures expected to rise next week.

Officials are worried about the effects on people’s health and on healthcare systems already challenged by the COVID-19 pandemic as the searing heat sweeps the continent, with warnings issued for worse to come in Britain in particular.

The World Meteorological Organization said the heatwave would worsen air quality, especially in towns and cities.

“These result in a degradation of air quality and adverse health effects, particularly for vulnerable people.”

Portuguese Health Minister Marta Temido said on Thursday the health system faced a “particularly worrying” week due to the heatwave and said some hospitals were overwhelmed.

“Nights are also likely to be exceptionally warm, especially in urban areas,” he said. “This is likely to lead to widespread impacts on people and infrastructure.”

Hannah Cloke, climate expert at Britain’s University of Reading, said the heatwave showed climate change was here and there was an urgent need to adapt.

“We are seeing these problems now and they are going to get worse. We need to do something now,” she told Reuters.

“It’s harder to cope with these types of temperatures in the UK because we’re just not used to them.”

In Portugal, the highest temperature on Thursday was recorded in the northern town of Pinhao at 47 C (116.6 F), just below the record.

Raymond Loadwick, 73, a retiree from Britain now living in the Portuguese district of Leiria, had to leave his home with his dog Jackson when flames started to burn down a hill packed with highly flammable eucalyptus and pine trees on Tuesday.

When he returned a day later, his white house stood untouched but the vegetation around it had turned to ashes and his fruit trees were burned down. Loadwick is scared fires will happen more often in the future: “You have to be on your guard,” he told Reuters.

In France’s Gironde region, 11,300 people have been evacuated since the wildfires broke out around Dune du Pilat and Landiras. Some 7,350 hectares (18,000 acres) of land have been burnt. Authorities said the fires had not yet been stabilised.

In Spain, the wildfires that have been burning in parts of Extremadura, which borders Portugal, and the central Castille and Leon region forced the evacuation of four more small villages late on Thursday and on Friday.

The flames are now threatening a 16th-century monastery and a national park. Several hundred people have been evacuated since the fires started and 7,500 hectares of forest have been destroyed in the two regions.

In Catalonia in the northeast, authorities suspended camping and sporting activities around 275 towns and villages to prevent fire risks and restricted farm work involving machinery.