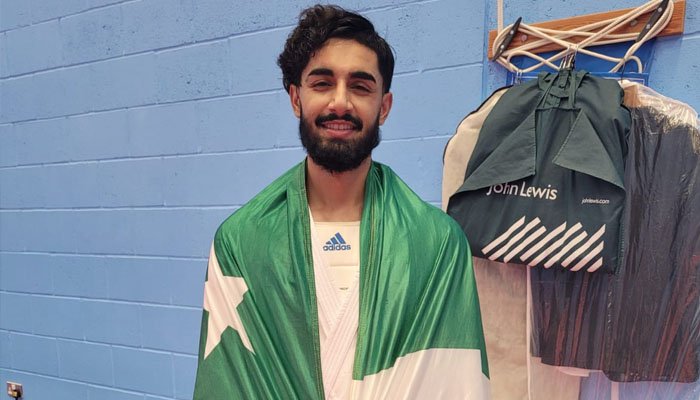 
Pakistan’s Hamza Iqbal Raja has won a bronze medal for Pakistan in 10th Commonwealth Karate Championship being played at Birmingham.

Hamza, who hails from Azad Kashmir, was competing in men’s -84 category bout.

He started off his journey to Bronze with win over India’s Vivek Teja Cherupalli in first round. The Pakistani Karateka knocked out his Indian opponent convincingly with score of 8-0.

However, in quarter final contest Hamza went down 7-2 against England’s Joe Kellaway.

Following defeat in quarter final, Hamza’s chance of winning a medal remained alive and he entered in Repechage round.

He defeated Wales’ Nathan Preece 11-5 to qualify for the bronze medal bout where he faced Demetris Demetriades of Cyprus.

In the medal contest, the Pakistani Karateka was on top of his form. The Cypriot karateka also displayed some of the best skills but it wasn’t enough to tackle young Pakistani athlete who won the contest with score of 8-5.

Pakistan’s other Karateka in the championship Saadi Abbas wasn’t in his best form and finished at 5th place.

Saadi had got a bye in first round but went down 5-3 against Australia’s Mithcell Durham in quarter final. He managed to win his first repechage fight against Canada’s Nicholas Patrick 4-0 but in the bronze medal contest, he was beaten by India’s Aman Kumar 4-1.