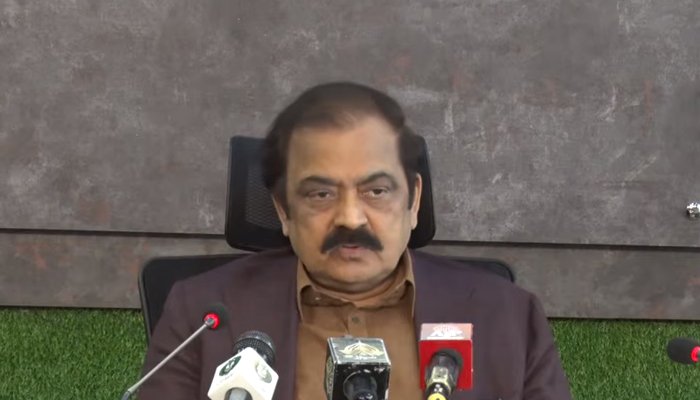 Govt to file reference under Article 6 against PTI leaders: Sanaullah

Late Wednesday, the apex court issued a detailed judgment in the suo motu case on former NA deputy speaker Qasim Suri’s ruling on the no-confidence motion against former prime minister Imran Khan, saying the court was not satisfied with the proof as insufficient evidence was presented to support PTI’s claim of foreign interference.

“Whether these acts attract Article 6 of the Constitution (high treason) is also left open to be determined by the parliamentarians to ponder whether they should leave open the doors to such unconstitutional acts or take suitable measures to stop such a mess in future,” he had suggested.

Addressing a press conference today, the interior minister said: “We have started works to file a reference under Article 6. Only the federal government has the authority to file cases under Articles 5 and 6.”

The interior minister said that the top court has given a “historic” verdict on the former deputy speaker’s ruling. “This decision has accepted the rule of law and the rule of people.”

Sanaullah said that the court used the words “blatant violation” in its judgement which has led to PTI Chairman Imran Khan’s “political demise”.

He added that other than the treason case, there was another way to punish the PTI leaders.

“The NA speaker will move the election commission seeking to unseat and disqualify them (PTI MNAs, including Imran Khan),” he added.

Sanaullah added that he would also seek the federal cabinet’s permission to arrest the PTI chairman.

In response, Prime Minister Shehbaz Sharif also said that the detailed judgment issued by the SC on the vote of no-confidence has “exposed the lies and propaganda” by Imran Khan and his party leaders.

In a post on Twitter, he termed it “utterly shameful” how the former premier tried to undermine the Constitution and “fabricated the narrative of regime change”.

On the other hand, the PTI has termed the Supreme Court’s judgment “full of errors”. “The history of Supreme Court decisions in Pakistan has not been that bright,” PTI leader Fawad Chaudhry said at a press conference.

Chaudhry claimed that the PTI had urged the apex court to investigate the matter and submitted documents related to the “cipher” to the court, but the SC turned down the request and asked the party to not “speak on the cipher in detail”.

The PTI leader said the SC judgment states that there wasn’t enough material to back the foreign conspiracy theory as “the court did not even bother to look at the evidence”.

Moreover, the PTI leader claimed that people are aware of why the SC “did not want to investigate the cipher” as once the probe of the alleged conspiracy begins, then a conversation — that “they want to avoid” talking about it — will take place.

Commenting on Miankhel’s additional note, Chaudhry said that “if we begin to pursue cases under article 6, we will find there are more people to hang than there are nooses”.