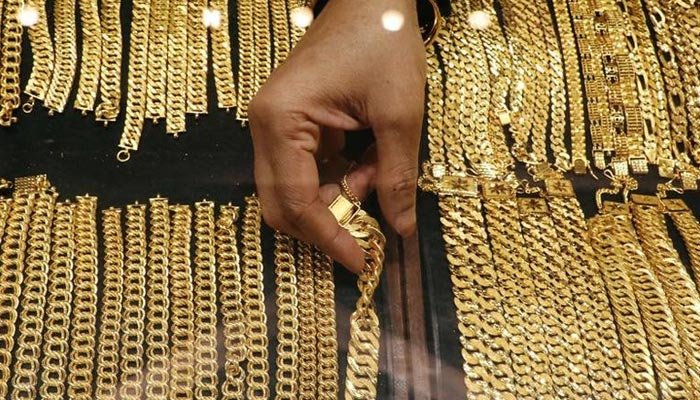 
KARACHI: Gold price in Pakistan snapped its five-day gaining streak on Wednesday, following overseas leads, but buying retreated as traders hoped for greater falls to stock up for the upcoming wedding season.

The yellow metal cumulatively had gained Rs12,150 per tola in the five sessions (Thursday-Tuesday).

However, physical buyers were still on the sidelines hoping for bigger falls in a seasonally lean demand period.

The yellow metal had scaled record in July. Prices have since moved into a steadier range as the market digested a more hawkish outlook from the depreciating rupee and falling markets.

High inflation is in favour of precious metals and analysts believe that it is not going to go away anytime soon. They believe that constant fluctuations in rupee-dollar parity were limiting the gains in gold and could force the metal to trade sideways and be choppy.

Investors who used to pour money into foreign currencies, particularly the US dollar to avoid the impact of inflation, are now buying gold because the government and the central bank are trying to reduce the rupee-dollar parity.

Past practices suggest that people used to take aggressive positions in gold in inflationary days. In the international market, the price of yellow metal decreased by $3 per ounce to settle at $1,711.

Gold rates in Pakistan are around Rs4,000 below the cost compared to the rate in the Dubai market.

Meanwhile, silver prices in the domestic market remained unchanged at Rs1,480 per tola and Rs1,268.86 per 10 grams.

Gold price in Pakistan falls by Rs4,000 per tola