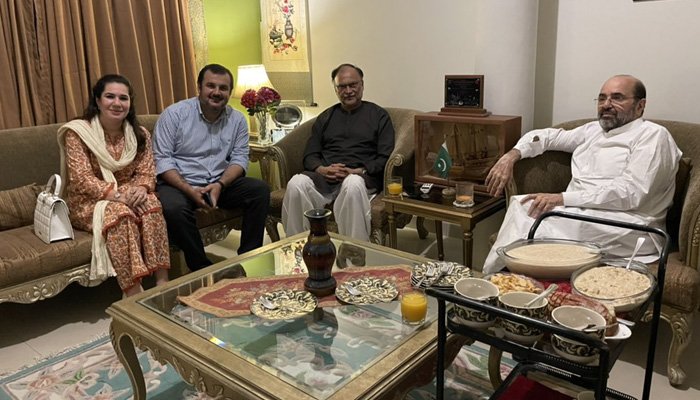 KARACHI: The family, who had heckled Federal Minister for Planning and Development Ahsan Iqbal at a fast-food outlet in Bhera, has rejected the claims made by PTI’s Shahbaz Gill that they were “pressurised” to apologise to the PML-N leader.

Talking to Geo News, family member Osama Sher expressed regret on their behaviour in a public space that was condemned widely.

“We realised that we have made a mistake,” he said.

Osama Sher said there was no pressure on them and they went to Ahsan Iqbal’s house willingly and apologised for their conduct.

“I don’t know where such things come from on social media. This was 100% their decision to apologise and our family also realised that what we did was wrong.”

The family had gone to the PML-N leader’s residence on Sunday and “expressed remorse and embarrassment” after which the PTI claimed that they were “pressurised” and “threatened” to do so.

In a tweet accompanying a photo with the family who had visited him at his residence, Ahsan Iqbal wrote: “The family involved in the incident came to Narowal and apologised for their actions in our meeting and expressed remorse and embarrassment.”

Iqbal said that he had already announced he “won’t be taking legal action against them”.

“We are all Pakistanis. We must not turn the right to disagree with each other into hatred and must maintain mutual respect,” he added.

Iqbal was heckled on Friday at the restaurant where he had apparently gone for dinner.

The video of the incident showed people hurling abuses at the minister and quickly went viral on social media.

Later on, taking to Twitter, Iqbal wrote: “Today, a family — who apparently considered themselves elites and supported PTI — clashed with me.”

Criticising the PTI Chairman Imran Khan for “instilling hatred” among people, Iqbal wrote: “Just like their ignorant and lunatic leader, his supporters are following suit.”

However, in a press conference, the planning minister had said he would not seek criminal charges against the PTI supporters.

PML-N says Nawaz Sharif to return to Pakistan in September