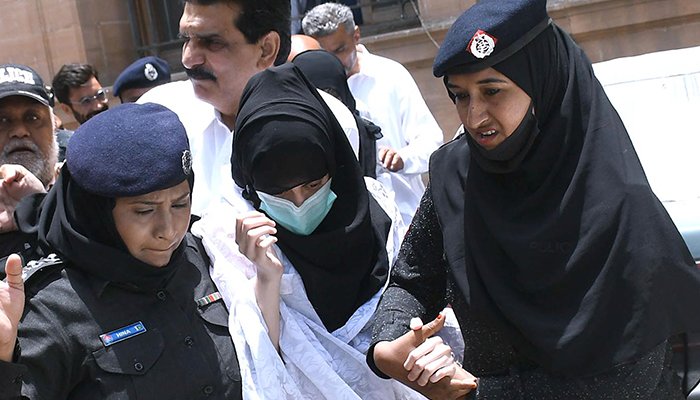 Dua Zahra to be presented before medical board today: police

KARACHI: Teenager Dua Zahra will be presented before a medical board today for a test to determine her age, police officials said Saturday morning, as they brought her to the port city from Lahore in line with court orders.

The test to determine her age will be conducted once again after her father challenged an earlier test that revealed that the girl’s age was between 16 and 17.

The Anti-Violent Crime Cell (AVCC) took Zahra — who had gone missing from her Karachi residence in April but was later found to have married Zaheer Ahmed in Lahore — into its custody from Lahore after a special team was formed to recover her.

The police officials further said that she will be produced before the medical board, which was constituted last week, for an ossification test, while her husband has reached Karachi on his own.

The Sindh High Court (SHC) had on June 8 said that the teenager, who claims she entered into marriage with Ahmed of her own will, was free to decide her fate.

Her father Mehdi Ali Kazmi challenged the SHC order in the Supreme Court but it was disposed of on June 23 as it did not fall in the jurisdiction of the top court.

During the SC hearing, a three-member bench had asked the father to approach relevant forums for the formation of a medical board to ascertain Zahra’s age.

Judicial Magistrate-XXIV Aftab Ahmed Bughio had on June 25 directed the Sindh health secretary to decide within a week on the application filed by Kazmi calling for a medical board to be constituted to determine his daughter’s age as he insisted that she was a minor.

Subsequently, a 10-member medical board was then formed by the Sindh Health Department, which will be headed by Dow Medical College Principal Prof. Saba Sohail and will include experts in radiology, gynaecology, dentistry, and forensics.

The court noted that the judicial magistrate hearing her case has not announced a verdict based on the IO’s challan.

Even if the challan is accepted, the petitioner has the right to appeal, the court said.

The issue to determine her age is still pending with the medical board, it further observed.

Zahra’s father had last week filed a plea in the district and sessions court through his lawyer seeking a replacement of the IO. He claimed that the officer was probing the case in a “biased manner”.