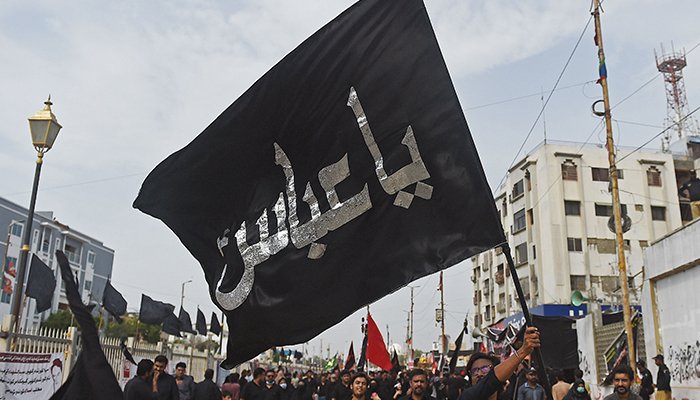 
KARACHI/ISLAMABAD/PESHAWAR: The country-wide Muharram 9 mourning processions came to an end peacefully on Monday amid strict security to ensure the prevention of unfortunate events.

Mobile services were turned off in major cities of the country, including Peshawar and Karachi, while thousands of police personnel were deployed for the security of processions.

In Karachi, the main procession began at 1pm from Nishtar Park. It passed through MA Jinnah Road, Saddar’s Empress Market, Tibet Centre and ended at Hussainia Iranian Imambargah in Kharadar.

The Sindh government imposed a ban on pillion riding from August 5-10 and also prohibited the use of helicams or drones as part of security arrangements.

The authorities monitored the procession through CCTV cameras and carried out aerial surveillance of the rallies. Snipers were deployed on the roofs of buildings located along the procession’s route. Scouts organisations, rescue services, and the city administration also made necessary arrangements to facilitate the rally’s participants.

The main procession in Islamabad started from Markazi Imambargah Asna Ashri in Sector G-6/2 and culminated at the same place after passing through its traditional route.

He said that the cooperation of organisers should be ensured by police and law enforcement officials.

The main procession in Peshawar departed from Imam Bargah Hussainia Hall at 10am and concluded at Imambargah Hussainia after passing through its traditional routes.

Capital City Police Officer (CCPO) Muhammad Ijaz Khan said over 11,000 personnel had been deployed as part of upgraded security for the last days of Ashura.

Roads leading to the inner city remained blocked with barbed wires and blocks, while traffic has been diverted to alternate routes. A number of policemen, along with Frontier Constabulary personnel, are also deployed for security.