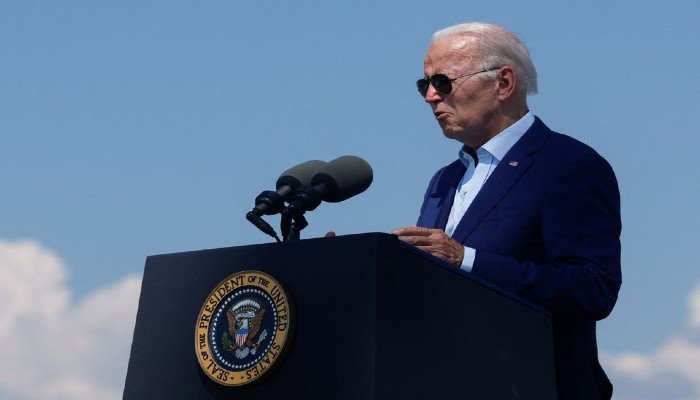 WASHINGTON: US President Joe Biden said on Wednesday that climate change is an emergency but stopped short of a formal declaration, announcing a modest package of executive actions and promising more aggressive efforts.

Biden made the comments during a visit to Massachusetts and as a historic heat wave batters Europe and the United States. Some 100 million Americans from New York City to Las Vegas will be under heat warnings this week.

The announcements included new funding for cooling centers and pushing for new off-shore wind projects in the oil-rich Gulf of Mexico.

Still, those actions fall short of demands by Democratic lawmakers and environmental activists who want Biden to formally declare a climate emergency, which would enable the use of the Defense Production Act to ramp up production of a wide range of renewable energy products and systems.

Biden is under increasing pressure after conservative Democratic Senator Joe Manchin said last week he was not ready to support key climate provisions in Congress, a critical loss in the evenly divided Senate.

The Federal Emergency Management Agency will provide $2.3 billion in funding to help states build cooling centers to deal with excessive heat and to tackle other impacts of climate change, the White House said as it announced the largest ever investment to the Building Resilient Infrastructure and Communities Program.

Biden spoke from a former coal-fired plant that is playing a role in supporting the state’s offshore wind industry as a manufacturing hub for undersea cables.

Biden said more is to come.

“In the coming days, my administration will announce the executive actions we have developed to combat this emergency,” Biden said.

Senator Jeff Merkley and eight other Democrats sent a letter to Biden on Wednesday urging him to declare a climate emergency and use aggressive executive actions to limit emissions from fossil fuels produced on public lands and waters and maximize use of electric vehicles.

Biden promised tough action on climate change in his presidential campaign, and it remains a key priority for some voters ahead of Nov. 8 midterms for control of Congress. The US president also pledged in international climate negotiations to cut climate pollution by 50% by 2030 and reach 100% clean electricity by 2035.

But that climate agenda has been derailed by several major setbacks, including Congress failing to pass crucial climate and clean energy measures in a federal budget bill, record-setting gasoline prices, and Russia’s invasion of Ukraine disrupting global energy markets.

When asked whether Biden has concluded there is no longer any option for a climate bill, a senior White House official told reporters that other people could answer that question, evidently suggesting a lot depends on Manchin.

“Our focus is on what we can do,” the official said.