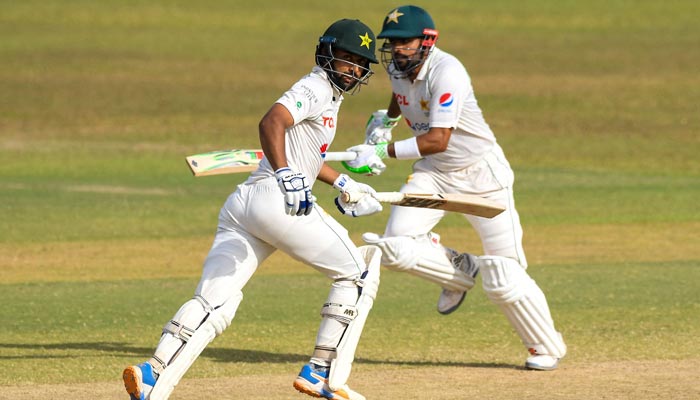 GALLE: Pakistan skipper Babar Azam on Wednesday said that Abdullah Shafique can become one of the world’s best Test openers after his epic century against Sri Lanka in Galle.

Shafique hit an unbeaten 160 to steer Pakistan home in a record chase of 342 at the picturesque venue as Pakistan won a tense opening Test in the final session on day five.

The 22-year-old batted for just under nine hours and five sessions against a spin attack led by the in-form Prabath Jayasuriya, who took a match tally of nine wickets.

“As a youngster, when you prove yourself and perform in tough conditions and difficult tracks, then it’s good,” Azam told reporters.

“His confidence was high after performing against Australia so he was on a different level. And to perform against quality bowling, your confidence goes up higher.”

Shafique, who made 136 not out against Australia in Rawalpindi in March, recorded his second Test ton in just his sixth match since making his debut last year.

The right-handed batsman blocked, defended, drove and attacked in his 408-ball stay laced with seven fours and one six to win rich praise from the captain.

“The way he plays, so clean and with his focus, he will get many, many more such knocks,” said Azam, who was involved in a key third-wicket stand of 101 with Shafique to set up the chase.

“I hope that he becomes one of the best openers in the world.”

Shafique, who now averages 80 in 11 Test innings, put on 71 runs with wicketkeeper-batsman Mohammad Rizwan (40) and then an unbeaten final stand of 41 with Mohammad Nawaz, who made 19 not out.

The 27-year-old Azam also kept up his prolific run-scoring with a defiant 119 in the first innings and then 55 in the second to push Sri Lanka on the backfoot.

Azam rated his century as “special” among the eight Test hundreds he has hit in 41 matches.

“It was kind of special because the team needed it,” said Azam, who batted with the tailenders in the first innings to help the team recover from 85-7 to 218.

“It was one of the best hundreds in Test matches (for me) because it was difficult. To play with tailenders you need double concentration to guide them and watch yourself as well. And I am happy that I did that.”

Azam also lauded opposition spinner Jayasuriya for being their “main weapon” in just his second Test for Sri Lanka.

The second and final Test begins on Sunday, also in Galle.