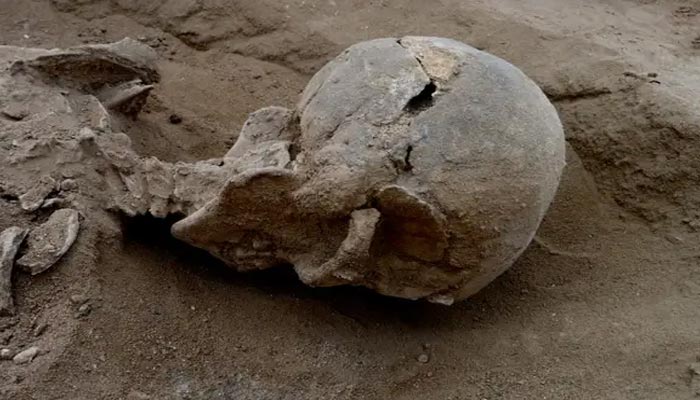 
TOKYO: A skeleton discovered in a remote corner of Borneo rewrites the history of ancient medicine and proves amputation surgery was successfully carried out about 31,000 years ago, scientists said Wednesday.

Previously, the earliest known amputation involved a 7,000-year-old skeleton found in France, and experts believed such operations only emerged in settled agricultural societies.

The finding also suggests that Stone Age hunter-gatherers living in what is now Indonesia’s East Kalimantan province had sophisticated medical knowledge of anatomy and wound treatment.

“It rewrites our understanding of the development of this medical knowledge,” said Tim Maloney, a research fellow at Australia’s Griffith University, who led the work.

The skeleton was uncovered in 2020 in the imposing Liang Tebo cave known for its wall paintings dating back 40,000 years.

Surrounded by bats, terns and swiftlets, and interrupted by the occasional scorpion, scientists painstakingly removed sediment to reveal an astoundingly well-preserved skeleton.

It was missing just one notable feature: its left ankle and foot.

The base of the remaining leg bone had a surprising shape, with knobbly regrowth over an apparently clean break, strongly indicating that the ankle and foot were removed deliberately.

“It’s very neat and oblique, you can actually see the surface and shape of the incision through the bone,” Maloney told a press briefing.

Other explanations, like an animal attack, crushing injury, or fall, would have created bone fractures and healing different from those seen in the skeleton’s leg.

A tooth and surrounding sediment showed the skeleton is at least 31,000 years old and belongs to a person who died at around 20 years old.

Despite the incredible trauma of amputation, they appear to have survived six to nine years after the operation, based on the regrowth on the leg bone, and suffered no major post-operative infection.

That suggests “detailed knowledge of limb anatomy and muscular and vascular systems,” the research team wrote in a paper published Wednesday in the journal Nature.

“Intensive post-operative nursing and care would have been vital… the wound would have regularly been cleaned, dressed and disinfected.”

‘A hotspot of human evolution’

Humans have been operating on each other for centuries, pulling teeth and drilling skull holes in a process called trepanation.

But amputation is so complex that in the West it only became an operation people could reasonably hope to survive about a century ago.

The oldest previous example was a 7,000-year-old skeleton with a forearm found in France in 2010.

It appeared to confirm that humans only developed sophisticated surgery after settling in agricultural societies, freed from the daily grind of hunting food.

But the Borneo find demonstrates hunter-gatherers could also navigate the challenges of surgery, and did so at least 24,000 years earlier than once thought.

For all that the skeleton reveals, many questions remain: how was the amputation carried out and why? What was used for pain or to prevent infection? Was this operation rare or a more common practice?

The team speculates that a surgeon might have used a lithic blade, whittled from stone, and the community could have accessed rainforest plants with medicinal properties.

The study “provides us with a view of the implementation of care and treatment in the distant past,” wrote Charlotte Ann Roberts, an archeologist at Durham University, who was not involved in the research.

It “challenges the perception that provision of care was not a consideration in prehistoric times,” she wrote in a review in Nature.

Further excavation is expected next year at Liang Tebo, with the hope of learning more about the people who lived there.

“This is really a hotspot of human evolution and archeology,” said Renaud Joannes-Boyau, an associate professor at Southern Cross University who helped date the skeleton.

“It’s certainly getting warmer and warmer, and the conditions are really aligned to have more amazing discoveries in the future.”

US shoots down Chinese spy balloon

China balloon soaring over US deflates hopes for diplomatic thaw

Longer-range rockets included in $2bn US pledge for Ukraine