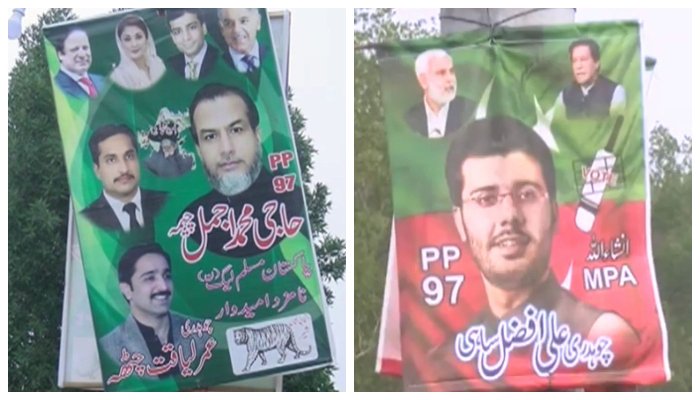 A dueling PML-N against a united PTI


On July 17, the control of the Punjab Assembly will be on the line, as the race for 20 seats in the province heats up.

In Pakistan’s most politically important province, the PML-N is hoping to maintain its narrow control, while the PTI is aiming to wrest the province away from the ruling party.

Who could tip the balance in their favour?

In the run-up to the by-polls, Geo.tv provides an in-depth look into the constituency.

PP-97 falls under the constituency NA-101, from where PTI’s Muhammad Asim Nazeer is MNA.

2018 winner: In 2018, the provincial constituency was won by Muhammad Ajmal Cheema, who won as an independent and later joined the PTI on the insistence of businessman Jahangir Khan Tareen.

This year, Cheema was disqualified by the Election Commission of Pakistan for voting against his party in the election for chief minister in Punjab.

The PML-N has allotted the ticket to Muhammad Ajmal Cheema.

Initially, when the campaign began, PML-N’s Ajmal Cheema was rumoured to have a good shot at victory, as the candidate has a significant vote bank in the constituency, which helped him defeat PTI’s Afzal Sahi in 2018 with over 4,000 votes.

Then add to Cheema’s tally the large PML-N electorate in PP-97. In 2018, the PML-N candidate, although came third, still managed to secure over 35,000 ballots.

But there is a problem, which could cost Cheema the election. There is resentment within the PML-N for the ticket being awarded to a politician who is known to regularly hop political parties. This is also why the constituency has yet to see any of the PML-N leadership openly campaign for Cheema.

The PTI’s Afzal Sahi is the son of the former speaker of the Punjab assembly, Afzal Sahi. The elder Sahi has won this constituency seven times, mostly from the PML-N platform. For this reason alone, Afzal Sahi, his son, has a strong chance of winning. Then the PTI chairman is also expected to hold a rally in the constituency to corral voters.

Since this constituency falls within the rural areas, biradari (clan) politics is very strong here, which is how voters are expected to vote on July 17.

There has not been much election activity till now except for door-to-door campaigns.

Lack of health facilities and clean drinking water is a major concern. Another problem is law and order.